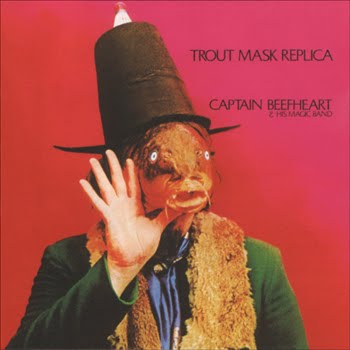 Fast and bulbous!
"I thought it was the worst thing I'd ever heard. I said to myself, they're not even trying! It was just a sloppy cacophony. Then I listened to it a couple more times, because I couldn't believe Frank Zappa [the producer] could do this to me — and because a double album cost a lot of money. About the third time, I realized they were doing it on purpose; they meant it to sound exactly this way. About the sixth or seventh time, it clicked in, and I thought it was the greatest album I'd ever heard."
— Matt Groening, who placed the album at #34 on his list of his "100 Favorite Things"
Advertisement:

Trout Mask Replica is Captain Beefheart's most well-known and notorious album. Released in 1969 and produced by Frank Zappa, it has never been a mainstream success, but became a Cult Classic for anyone with an ear for the bizarre and experimental. Especially for first-time listeners, the record is a good example of True Art Is Incomprehensible, and is known for its jagged rhythms, lack of traditional harmony and melodies, and dissonant sounds. Many listeners give up after trying only a few songs or only playing it once. However, for the patient listener, it can be an experience that changes one's view of traditional harmony and melody.

I cannot go back to your tropeland!: