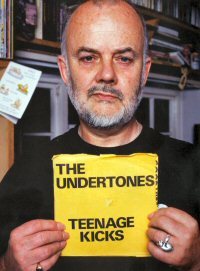 The Last DJ and his favorite song
"But here's the record. Undertones and "Teenage Kicks", what a treat..."
Advertisement:

A native of Cheshire, he served a stint as a radar operator in the Royal Artillery before moving to the US in 1961. He began his radio career in Dallas, then bounced around several other American cities before returning to the UK in 1967 to work at the beloved offshore pirate station Radio London. While at Radio London he became the first DJ to play songs from Sgt. Pepper's Lonely Hearts Club Band on the air when the station got a world exclusive to debut the album in its entirety a few weeks before its release.

After the demise of Radio London in the latter part of 1967, Peel took a job on the newly-created BBC Radio 1, which is where he stayed until his sudden death in 2004, making him of the BBC's longest-serving presenters. In this role, he was one of the most influential figures in the British music industry. From 1967 to 1975, he hosted a radio show called Top Gear (which title the BBC eventually used for an automotive show that launched a few years later), before he launched a late-night freeform programme that didn't have an official name apart from being his slot on the radio schedule, which he hosted from September 1975 until his death.

Peel was widely eclectic. Soon after joining Radio 1 he was one of the first DJs to play Psychedelic Rock and Progressive Rock. He went on to play rock, pop, reggae, metal, hip hop, electronic, noise, indie rock and every genre in between. He's most identified with four musical styles: punk, indie rock, electronic music and African music of all kinds, all of which he is credited with both popularizing and making cool in Britain. Although famous for championing many indie rock acts, Peel often expressed displeasure that his fans overwhelmingly preferred music made by what he dubbed "White boys with guitars" over the dance and world music he also spun.

He frequently plumbed the scenes outside the mainstream in search of new sounds. The vast majority of the records he played had never been played on radio before. He helped popularise not just hundreds of artists, but also whole genres and the music scenes of entire countries, particularly Zimbabwe, Zambia and Nigeria. When Peel played a single on the air, and especially if he liked it enough to keep playing it, it would instantly make the artist that recorded it very cool overnight. Peel's seal of approval could also have sway on the pop charts; For example, he is credited with helping "Uptown Top Ranking" by teenage Jamaican reggae duo Althea & Donna become a #1 UK hit in early 1978 because he regularly played a test pressing of the single on his show throughout late 1977.

Peel's show was instrumental in launching countless careers, from Pink Floyd to The White Stripes. He launched Billy Bragg's career when he mentioned he was hungry on air, and Bragg dropped him in a mushroom biryani... and a copy of his first album, which luckily enough, Peel loved. Peel's musical taste was sometimes at odds with his listeners; For instance, he was never much of a fan of Radiohead, Oasis, Suede or Kate Bush, and only started playing Blur after they shifted their sound away from Britpop. He continued to break new music right up to the end; In his last year of life, he began championing a young American band called The Black Keys and was the first DJ to play a new underground style of electronic music called Dubstep on the radio.

Peel's show was also well known for the so-called "Peel Sessions", live in-the-studio performances, usually of about 3 or 4 songs, which were specifically taped for Peel to play on the air. These sessions are highly sought after for their excellent sound quality, and were considered to be a sign that the band had "made it" in the indie rock world. Peel's personal favourite artists - particularly The Fall, Billy Bragg, Half Man Half Biscuit, The Wedding Present, Loudon Wainwright III, Ivor Cutler, Roy Harper, Pulp and PJ Harvey - would appear on his show countless times over the years.

Another famous aspect of Peel's show was the Festive Fifty

, a countdown of his listeners' favorite songs of the year, which often - but not always - entirely comprised of songs he played often on the show. The countdown started in 1976 as a "greatest songs of all time" list, but permanently changed to a year-in-review format in 1982. After Peel's death, his production team invited the online station Dandelion Radio to compile the Festive Fifty from 2006 onward.

In addition to his radio work, Peel was a presenter on Top of the Pops from 1982 to 1987, bringing both his indie cred and Deadpan Snarker attitude to the long-running pop music show.

His favourite song, from when he first heard it in 1978 to his death, was "Teenage Kicks" by Derry's The Undertones. Peel typically denoted the songs he liked by putting up to three asterisks next to it on a record sleeve; One meant he might play it on the radio, two meant he should play it and three meant he must play it. When he came across "Teenage Kicks", he gave it twenty-eight stars. The first time he played it, he said, "Wasn't that the most wonderful record you've heard in your life?", and played it again (and in the process, saved Terri Hooley's fledgling Good Vibrations label, such was the power of the Peel imprimatur). In a 2001 interview, he said the only thing he wanted written on his tombstone other than his name was "Teenage Dreams so hard to beat", and sure enough, it is.

Had someone recorded a new track anywhere on the planet? Chances are good John Peel played it. Possibly at the wrong speed by mistake, but preferring it that way after playing it again at the proper speed.

Peel abruptly died while on vacation in Peru in October 2004. His show was continued briefly by fellow BBC DJ Rob Da Bank before being canceled. His son Tom Ravenscroft followed in his footsteps and is a DJ for BBC Radio 6, a station that continues Peel's love for independent music.

His career is documented with historical context in the book Good Night and Good Riddance: How 35 Years of John Peel Helped to shape Modern Life, possibly the only book telling you what records a DJ played on any given night.