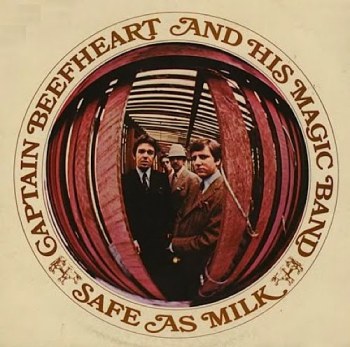 Don't zig zag wander around this album. Play and listen to it!
Advertisement:

Safe As Milk is the 1967 debut album by Captain Beefheart, generally regarded as one of his best albums, along with Trout Mask Replica, Lick My Decals Off, Baby, Clear Spot, and Doc at the Radar Station. It's also full of Early-Installment Weirdness. On this album, Beefheart is closer to the Blues sounds he tried to emulate his entire career than on any of his later albums. Some tracks such as "Call On Me" and "I'm Glad" are quite traditional, but amazing tracks like "Sure 'Nuff 'n' Yes I Do", "Dropout Boogie", "Electricity" and "Autumn's Child" show the experimental directions Beefheart would become famous for.

This is the only album recorded while Ry Cooder was in the Magic Band. On the cover, Cooder is the guy with sunglasses in the back.

John Lennon and George Harrison were big fans and photographed in the presence of the Safe As Milk bumper stickers.