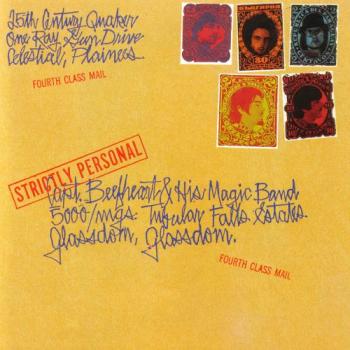 All brothers of tomorrow...
Advertisement:

Strictly Personal is a 1968 album by Captain Beefheart and the Magic Band. It was originally going to be called: "It Comes To You In A Plain Brown Wrapper" and the album art work still reminds of that concept. Because Beefheart's label Buddah Records didn't like the album Beefheart was forced to sign a contract with another label, Blue Thumb. He and his band re-recorded their songs, while producer Bob Krasnow added a Psychedelic Rock sound.

After the album failed to sell well Beefheart blamed it on Executive Meddling on behalf of Krasnow. Beefheart felt so disillusioned that he wanted to quit the music industry for good, but as history would have it Zappa who produce his next album Trout Mask Replica (1969), which gave Beefheart total creative freedom and made him a household name in alternative rock circles. As a result Buddah Records did release the initially rejected recordings in 1971 as the album "Mirror Man". In 1999 they brought out an expanded version named "The Mirror Man" Sessions", with five additional tracks. A CompilationAlbum, "I May Be Hungry But I Sure Ain't Weird" (1992) contained eleven of the original cuts taken from master tapes.