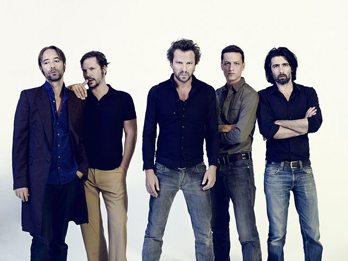 dEUS is an Alternative Rock band hailing from Antwerp, Belgium. Led by frontman Tom Barman the band makes a kind of music best described as eclectic with influences ranging from punk to jazz. They formed in 1991, starting out as a cover band, but they soon started writing their own songs. Their starting line up consisted of Barman, Klaas Janszoons, Rudy Trouvé, Stef Kamil Carlens and Jules de Borgher. Lots of changes in line-up followed and nowadays Barman and Janzoons are the only remaining members from the original line-up.

In 1992 the band released the EP Zea which was followed in 1994 by their debut LP Worst Case Scenario. Featuring the classic singles "Suds & Soda" (whose video was shown on Beavis And Butthead), "Hotellounge (Be The Death Of Me)" and "Via" it was released internationally with a slightly altered tracklist note The order of the songs was changed around, one song ("Let Go") was deleted, while two songs from Zea ("Right As Rain" and "Great American Nude") were added to great acclaim. The album's manic intensity and wide variety of genres caused difficulty to categorise it for critics, they eventually settled on art rock, something Barman isn't pleased about. It was followed by the experimental EP My Sister = My Clock. Two years later the band released their second LP In a Bar, Under the Sea which was once again a critical and commercial success.

Prior to the release of 1999's The Ideal Crash Carlens and Trouvé had left the band. They were replaced by Craig Ward and Danny Mommens. As a result Crash was somewhat of a New Sound Album, replacing the manic intensity of the previous two with a calmer and slightly more accesible sound. It spawned one classic single ("Instant Street") and is still very highly regarded. So far it is the only album by the band that wasn't released in the US.

After a brief hiatus the band reformed in 2004; de Borgher, Ward and Mommens all left, and were replaced by Stéphane Misseghers, Alan Gevaert and Mauro Pawlowski. The resulting line-up is the one the band has to this day. They released Pocket Revolution in 2005, followed by Vantage Point in 2008 and Keep You Close in 2011. They were all well received, but didn't spawn any big hits, causing the band to somewhat fade into obscurity though they are still popular in The Netherlands and Belgium.

They surprise released their seventh album Following Sea in 2012, it features "Quatre Mains", their first song in the French language. They are currently touring in support of the recently released Greatest Hits Album Selected Songs: 1994 - 2014.

The band has managed to gain some notable fans over the years, including Gary Lightbody (Snow Patrol), Brian Molko (Placebo) and Guy Garvey (Elbow) who contributed to the documentary "Time Is The State Of My Jeans" (2009).