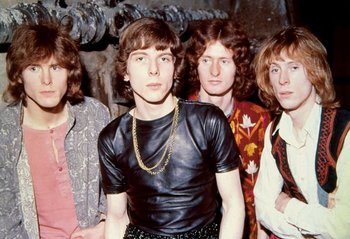 Caravan are a British Progressive Rock band formed in 1968 by Pye Hastings, Richard Coughlan, and Richard and David Sinclair after all four left The Wilde Flowers, a proto-prog group that also contained future members of Soft Machine. They got signed by Verve Forecast, and released their debut, Caravan, in 1969. It was a respectful display of Psychedelic Rock in its own right, and "Where but for Caravan Would I?" already foreshadowed their later sound. However, after gaining new leadership, Verve dropped them from their record label (The Velvet Underground and The Mothers of Invention were also victims, though in Caravan's case it was due to Verve shutting down their British operations). Hastings later recalled "that situation really left us in limbo".

Undeterred, they signed on to Decca Records and released If I Could Do It All Over Again, I'd Do It All Over You in 1970. The album saw them expand their sound to feature less psychedelic elements and more prog elements, most prominently on "And I Wish I Were Stoned/Don't Worry", "With an Ear to the Ground/You Can Make It/Martinian/Only Cox/Reprise", and the lengthy jazz-rock epic "For Richard". The record also saw their pop sensibilities come into play with the Title Track and "Hello Hello", the latter of which led to an appearance on Top of the Pops.

Their next record, In The Land of Grey and Pink, was released in 1971 on Decca's Progressive Rock sublabel Deram, which would be Caravan's home for the next few years. While ignored upon release (though "Nine Feet Underground" was played on Late-Night Radio a bit), it's now not just considered their masterpiece but one of prog's best albums period, and the definitive release of the Canterbury Scene, featuring both finely crafted British pop songs ("Golf Girl", "Love to Love You", the Title Track) and lengthy prog epics ("Winter Wine" and the 22-minute "Nine Feet Underground").

The next album, Waterloo Lily, saw the departure of David Sinclair. He was replaced by Steve Miller (no relation) of the Blues Rock/Jazz Fusion band Delivery. Miller brought with him a Wurlitzer piano and an overall jazzier sound, being the closest Caravan got to straight Jazz Fusion.

Afterwards, both Sinclair and Miller left to form Hatfield And The North. The next album, For Girls Who Grow Plump In The Night, saw the return of David Sinclair and the addition of John G. Perry and viola player Geoff Richardson. It wound up being their rockiest album to date, with further emphasis being placed on Hastings' guitar and Richardson's viola, the latter of which gave the album a folkier sound to it as well. With the epic "Memory Lain, Hugh/Headloss" and the delightful "The Dog, The Dog, He's at it Again", it's frequently seen as just as good as, if not better, than In the Land of Grey & Pink.

Unfortunately, the next album, Cunning Stunts, proved to be a mixed bag, and the follow-up, Blind Dog at St. Dunstans, is frequently seen as the start of Caravan's Dork Age. From that point on, they were plagued with frequently changing line-ups which only proved to add more damage. They broke up in 1985, reformed in 1990, and continue to tour and release albums to this day, which have had mixed receptions (although The Battle of Hastings and The Unauthorised Breakfast Item were received well-enough). Richard Coughlan died in 2013, leaving Pye Hastings as the only constant member of Caravan.

Their sound is frequently described with the "Canterbury Scene" label, and they themselves tend to have a mellower sound than most other prog bands, which a lingering Jazz influence throughout most of their work. However, they are also known for their pop sensibilities.