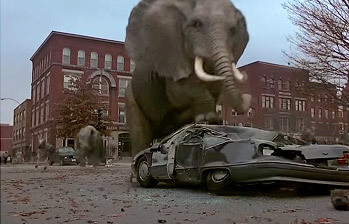 It's a city stampede!
A popular trope in comedies and a subtrope of Hilarity in Zoos. An animal escapes from a zoo, a circus, a pound, a laboratory or some other kind of area where it formerly lived in restricted conditions. The creature might be dangerous, like a Killer Gorilla, a lion, a bear, a tiger, a wolf, a rhinoceros or an elephant, or just something that might provide zany antics, like monkeys, a kangaroo, a seal, etc. If there's more than one animal that escaped, they may go on an Animal Stampede.
Advertisement:

Invariably our protagonists will always encounter this escaped animal. Either they have to fight it off and bring it back to the zoo in order for a huge award, or they help it remain hidden and even might transport it back to its natural environment.

A trope Truth in Television, as several animals have been known to escape and create panic and chaos along the way. In Real Life this is usually not that funny, as people might get injured or even killed. And not only with obviously-dangerous animals. Innocent looking creatures, like a chimpanzee, can get very aggressive if they feel threatened. The animals themselves may even get shot by zookeepers and/or the police.

Also note that this trope is exclusively meant for animals that were held captive by humans, not animals entering the human world from a forest or something.

The animals may have escaped due to the zoo being a Menagerie of Misery. See also Animal Stampede when enough escaped animals rampage at once.

In "Animan", the titular villain lets a bunch of animals out of their cages, resulting in this.

In "Animan", the titular villain lets a bunch of animals out of their cages, resulting in this.