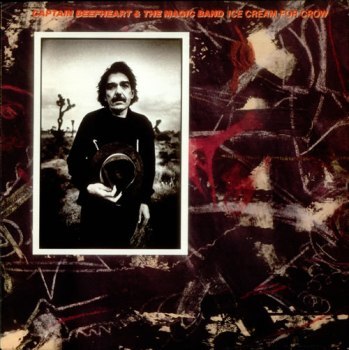 Turn up the speakers! Hop flop squawk. It's a keeper!
"The final album, "Ice Cream For Crow", was amongst his very best, but an aging Beefheart now had to face a choice between his respected, but struggling career as a rock guru and his emerging reputation as a painter."
— John Peel, in the documentary "The Artist Formerly Known as Captain Beefheart" (1997).
Advertisement:

Ice Cream for Crow is a 1982 album by Captain Beefheart, the twelfth in his catalogue. Fan favorites are "Ice Cream for Crow", "Evening Bell", "The Thousand and Tenth Day of the Human Totem Pole" and "The Past Sure Is Tense".

A music video was made for the Title Track, but despite good reviews it would become Beefheart's final album before he withdrew himself from the music industry due to multiple sclerosis and became a Reclusive Artist who devoted the rest of his life to painting.

The remastered version includes a bonus track, "Light Reflected Off the Oceans of the Moon" (4:47).

Hey Garland, I dig your tropes