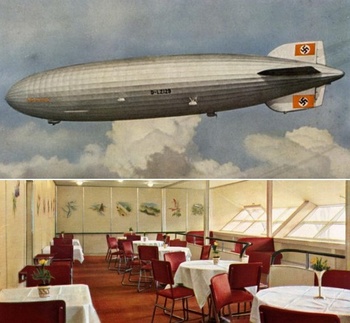 The Sky Is an Ocean, and you're flying in the Titanic.
"Oh, the Humanity!"
— Herbert Morrison, reporter and observer naming a trope
Advertisement:

Back in the Golden Era of aviation, there was an aircraft that surpassed all others in size, range and palatial luxury. This was the LZ 129 Hindenburg, named after Paul Von Hindenburg, a famous German general during the First World War and President of Germany until his death from natural causes in 1934. Because of his (unwitting) involvement in Adolf Hitler's rise to power, the Nazi Party, in power at the time of the airship's construction, named it after him. The gigantic airship itself was a Zeppelin — a lighter-than-air craft like a blimp, but with a rigid internal frame. It was the largest flying machine ever built at 263m (804 feet) in length, about the size of the RMS Titanic and four times the length of a Boeing 747 (and looking especially big, since unlike the 747, it was usually seen at a much lower altitude in flight), and was used as a commercial craft, like a luxury liner.

Although it isn't readily apparent from the exterior of the ship in pictures, Hindenburg had passenger decks totaling more interior space than even an Airbus A380, the world's largest double-decker jumbo jet. There were truly astonishing luxury facilities on board. The Hindenburg boasted a gourmet restaurant, a bar with a glass floor, promenades with huge tilted windows that could be opened in flight, staterooms reminiscent of the sleeping car on a luxury train, a double grand staircase, a smoking lounge, a small library and writing room, a huge stylized mural of the world with moving ships and Zeppelins that tracked the journey of the airship, and even a piano lounge. It also carried unusual cargo, such as live animals and even a luxury car.

One cannot overstate the appeal of these magnificent airships. People would drop what they were doing and rush outside to see one pass overhead. They would take pictures. It was the kind of thing you told your grandchildren about, especially if you got to ride in one. Cross the technological sophistication of the "Concorde" and the grandeur of RMS Titanic and you'll have some idea. Like the Concorde, it was the fastest way to cross the Atlantic in its day, making the journey in two and a half days. To give you an idea of how much people adored Zeppelins back then, you have to consider that the decadent $2.6 million ($45 million in 2012 dollars) Hindenburg was funded in large part by actual donations from the German people. In the middle of the Great Depression. Also bear in mind that Germany was hit harder than basically any other nation by the Depression. Flights were not affordable to everyone: a one-way transatlantic trip on the Hindenburg cost $400,note A price of a modest car at the time. or $6,500 in today's money. Nevertheless, it was a steal compared to the other means of a similarly luxurious travel — a first class on the Titanic was $2,500 ($70,000 in current money) or, if you preferred air travel, you'd have had to dish out $675 ($11,000 nowadays) for the far less luxurious Boeing Clipper

. So it was great bargain for the money, but still cost as much as a small car to fly in! On the other hand, if you hop on a first-class transatlantic jet today, it still costs around $8,500.

On May 6, 1937, the ship was just about to complete its inaugural flight for the year, flying into Lakehurst Naval Air Station in Lakehurst, New Jersey. Due to previous heavy weather conditions, the ship was already late, and Captain Max Pruss had kept in the air for a few additional hours longer than expected while waiting for a thunderstorm at Lakehurst to clear. At around 7 p.m., the Hindenburg came into Lakehurst and attempted an midair mooring in heavy winds. A crowd of enlisted US sailors assembled to pull the the big zep's handling lines. Newsreel cameras were rolling and veteran radio newscaster Herbert Morrison of WLS (a Chicago radio station) was making a test recording (on special phonograph disks) of what he thought was going to be a routine landing with subsequent passenger interviews.

The world knows what happened next. With the Hindenburg only a few feet from its mooring mast, it ignited. The gargantuan fireball was over a thousand feet high, and the impact broke the skyscraper-sized airship's metal skeleton in half. The airship sank steeply, crumpling into the ground. Burning hydrogen rocketed up the axial catwalk and erupted from the bow as the rest of the airship was incinerated from within, the ship's fabric hull bearing the name Hindenburg melting away from the skeleton. As the Zeppelin sank to the ground, people streamed from the windows of the passenger decks. As panic set in on the ground, US Navy Chief Petty Officer Fred "Bull" Tobinnote  Chief Tobin was an experienced airship crewman who had survived the catastrophic crash of the US Navy zeppelin Shenendoah several years earlier shouted, "Navy men, STAND FAST! We have to get those people out of there!" and led the sailors into the inferno. Finally, the hydrogen gave out, and the white-hot frame collapsed on the still-burning wreckage as people continued to stumble and jump out and sailors under CPO Tobin rushed to pull people from the decks. The horrified Morrison kept right on talking through all of this, describing exactly what was happening until he was overcome with smoke and emotion and had to step inside the hangar to recover himself. (He was back out again in less than two minutes, continued his narration and assisted and interviewed survivors.) In total, the disaster claimed the lives of 35 people aboard the Hindenburg and one American sailor on the ground, with 62 passengers surviving. The entire ordeal lasted thirty seconds. The whole crash was caught on film,

if you wish to see it. However, Morrison's radio commentary was only dubbed in later, giving it the feeling of live TV coverage of the disaster.

Nobody is sure what happened that day. Inquiries held afterwards suggested everything from a lightning strike to deliberate sabotage, although most investigations indicate that, just like other disasters, it was a cascade of preventable events, like dominoes, that led to the crash. The most likely scenario is that a discharge of static electricity ignited a small amount of leaked hydrogen gas, which quickly grew into an unstoppable chain-reaction. Greek chemical engineering expert Konstantinos Giapis

re-created a scale model of the ship's outer surface to determine how the static discharge happened. He thinks it started when the mooring ropes were dropped from the nose, connecting the ship to earth. Positive and negative charges caused the ship to act as a capacitor, which lit the flammable hydrogen for their ship, used because the United States, which at the time had the only sources of helium in the world, wouldn't sell any to Nazis. Whatever caused it, the crash of the Hindenburg is an iconic moment in the histories of aviation and broadcasting. It was the end of the use of airships for passenger flights for decades, until the 1990s, when the Zeppelin company went back into the airship business with their smaller "NT" semi-rigid tourism airships. In 2019, a group of scientists proposed helping to solve pollution by creating giant robot-crewed airships for cargo transport

On November 16, 2019, the last survivor of the Hindenburg disaster, Werner Gustav Doehner, died of pneumonia. He was 90.