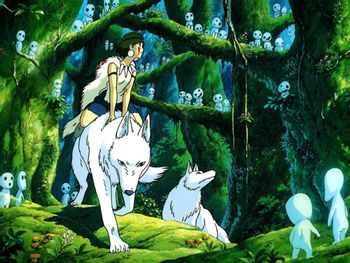 Respect the forest and the forest shall respect you.
"Ahhh, the great outdoors!"
— The Dryad, Warcraft III
Advertisement:

A hero who lives largely in isolation from human civilization in the wild. They have an uncanny affinity with and appreciation for the local wildlife and can communicate with them easily and have them listen to their requests. This kind of hero spends time helping visitors survive the region and protecting the region and its wildlife from those who would exploit or destroy it. Quite likely to have been Raised by Wolves. Tends to have No Social Skills or become a Socially Awkward Hero if they leave the wilds. Could be either male or female.

Sometimes this hero isn't quite as friendly as some others, and openly admits that most people get on his nerves.

Often has Wild Hair, and either dresses in furs or Garden Garments.

Subtrope of Nature Lover. See also Druid, Jungle Princess, Tarzan Boy, Mountain Man, Wild Child, Forest Ranger, and Liminal Being, all of which frequently overlap with this. Contrast with Science Hero, although overlap may be present in the case of more ecological-minded scientists.