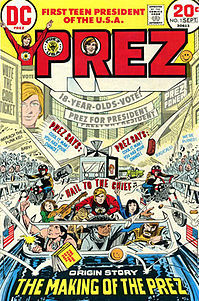 Prez is a comic book series published by DC Comics. It was created by writer Joe Simon and artist Jerry Grandenetti, and debuted in 1973; it ran for four issues (and one crossover in the tenth issue of Supergirl (Vol 1)) before being cancelled.

Prez imagined a world in which the then-recent lowering of the minimum voting age results in a motivated population of youth voters who elect eighteen-year-old Prez Rickard the first teenaged President of the United States. He populates the Cabinet with his family and friends, appoints a Noble Savage to head the FBI, and combats a variety of menaces, including Boss Smiley, the corrupt political manipulator who got Prez into politics in the first place in an attempt to capture the youth vote, only for Prez to turn against him on realizing his true nature.

The premise kept the series from being regarded as part of the main DC Universe (Supergirl crossover notwithstanding), which limited Prez's chance of a return appearance, but the series got a number of nods over subsequent years. The best-known — probably more familiar to many readers than even the original series — is "The Golden Boy", one of several issues of The Sandman highlighting obscure older DC characters; it retells Prez's career, explicitly setting it in an Alternate Universe and providing the conclusion the series never got. The 1995 Vertigo Visions one-shot Prez: Smells Like Teen President continues "The Golden Boy" story to explore the failure of the 1970s ideals through P.J., Prez's alleged bastard son, as he travels around the country trying to find out what happened to his father.

In 2015, a new version of Prez was launched as part of the DC YOU line, set 20 Minutes into the Future and featuring Beth Ross, a teenager in a dead-end fast food job who inadvertantly gets made President on a wave of social media stardom ignited by a viral video.

Due to the attention attracted by the reboot, in 2016 DC published a trade paperback titled Prez: The First Teen President, collecting all the appearances of the original Prez. He also made an appearance in an episode of Batman: The Brave and the Bold.

The 1973 series provides examples of: