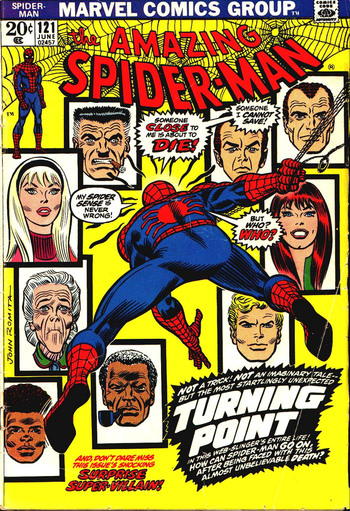 Behold: The beginning of the end for the Silver Age...
"I'm going to get you, Goblin! I'm going to destroy you slowly... and when you start begging me to end it— I'm going to remind you of one thing. You KILLED the woman I loved! And for that you're going to die!"
— Spider-Man
Advertisement:

An iconic storyline in Marvel Comics' The Amazing Spider-Man series, spanning issues #121-122 (June-July, 1973). It was written by Gerry Conway, penciled by Gil Kane, and inked by John Romita & Tony Mortellaro. The two issues have two separate titles: The Night Gwen Stacy Died, (#121) and The Green Goblin's Last Stand (#122) but it's known by the title of the first issue, which is famous for killing off Spider-Man's girlfriend Gwen Stacy.

The year was 1973. For ten years, Spider-Man had been one of Marvel's most popular characters. The patterns of Peter Parker's life were pretty well established. He attended Empire State University, fought creeps like Doc Ock, the Lizard, Kraven the Hunter, Mysterio, and the Green Goblin, made money by selling pictures of himself in action to the Daily Bugle and its cantankerous publisher J. Jonah Jameson, and was deeply in love with Gwen Stacy. For the most part, superheroics had been a game to Parker. The closest he'd personally come to dying was being pinned down under a ton of machinery in Doctor Octopus' lair, and he nearly always came out on top in the end. Tragedy had struck when Gwen's father (a retired police captain) died while he was fighting a battle, but that was written as a Heroic Sacrifice after he was revealed to have found out Peter's secret identity in 1970. It would be his secret identity being exposed again that would set into motion another series of tragic events. The Green Goblin managed to stalk Spider-Man (whose Spider-Sense had been numbed) and discover that his greatest foe note although this is Gobby in the '60s we're talking about. Only foe works too was no older than 19 or 20. He successfully captured Parker and in his arrogance revealed his identity as Norman Osborn, the father of Peter's college classmate (and future roommate) Harry. Taking advantage of Osborn's inability to shut up, Spidey eventually broke free of his restraints and battled the Goblin. During the fight, an accident induced Laser-Guided Amnesia in Osborn, making him forget that he'd ever been the Green Goblin. Peter thought that he'd seen the last of the Goblin, until Amnesiac Dissonance caught up with Osborn and he started remembering his former identity in short spurts. The second time this happened, it resulted in the also famous storyline The Goblin Returns, which challenged The Comics Code Authority's guidelines on portraying drug use.

After this little relapse, things didn't go so well for Osborn. Harry's drug use had taken its toll on his relationship with Mary Jane Watson, and she broke up with him. Devastated, he had a little relapse of his own, overdosing on LSD. Norman's business wasn't doing so hot either, and the coupled stress of his shattered home life and business life drove him back into insanity. He took up the Goblin mantle again and kidnapped Gwen Stacy, knowing that Spider-Man would surely follow. Just to make sure Spider-Man knew it was him, he left one of his pumpkin bombs sitting on Gwen's purse. Spider-Man tracked the Goblin and an unconscious Gwen down to the George Washington Bridgenote although just about any bridge in New York has been used in flashbacks or other continuities, where he was given a Sadistic Choice: surrender or Gwen shall die. Spider-Man and the Goblin began to fight, and in the midst of the battle, the Goblin threw Gwen off the bridge. Acting quickly, Spider-Man shot out a webline to save her, only to find her dead when he brought her up.

The editors decided that the Goblin could not go unpunished for this, and so he died in the next issue, impaled by his own glider. From this point onward, Spider-Man's world (along with the comic book industry in general) had become considerably darker, forever haunted by the uncertainty of what had actually killed Gwen. Had the Goblin already killed her, or had Peter Parker killed the woman he loved with his webline? note The initial answer to the question was yes, Peter had inadvertently killed Gwen himself by causing her neck to break via whiplash, hence the "snap" sound effect in initial printings. How much this is stuck to whenever the event is referenced in later comics depends on the writer.

. The film initially saw little attention, but became further recognized towards the turn of the century, peaking when the film's creator made a "making of" documentary on its production in 2002. Both the original film and documentary were well-received at small film festivals, even garnering some praise from Stan Lee. Years later, the 2022 fan film Spider-Man: Lotus would adapt the story arc alongside an Adaptation Distillation of Spider-Man: Blue and The Kid Who Collects Spider-Man.

On the official side of things, the story line has never seen a full adaptation into television or film, though the iconic death itself has been referenced in the Sam Raimi trilogy SPOILERS! in Spider-Man, which had Mary Jane thrown off the bridge, but she survives, while Norman Osborn ends up impaling himself on his own glider the Marc Webb duology SPOILERS! in The Amazing Spider-Man 2, which does kill Gwen Stacy off, though Harry Osborn is the one to do the deed, and he's incarcerated instead of being killed, and the Marvel Cinematic Universe SPOILERS! in Spider-Man: Far From Home, where Mysterio is shown tossing MJ off the Eiffel Tower in an illusion; the real MJ survives and Mysterio disposes of himself; interestingly, it and Spider-Man: No Way Home also adapt a scenario from the What If? adaptation of this story, which showcased what would happen if Spider-Man's secret identity were exposed immediately after the confrontation after he saves the girl; the film also later expanding on the idea by having the Green Goblin successfully kill May Parker, with Peter attempting to kill him but ultimately curing Norman Osborn of the Green Goblin instead, as well as episodes of Spider-Man: The Animated Series (titled "Turning Point", the tagline on the magazine cover) and Ultimate Spider-Man (2012).

In a case of What Could Have Been, David Fincher expressed interest in directly adapting the story on film when Sony were working on the first live-action project, although they turned his pitch down because they wanted a more conventional Superhero Origin.