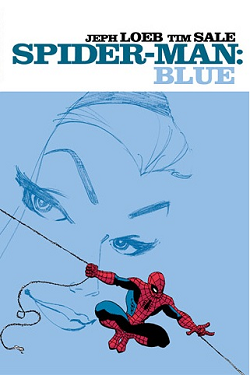 Spider-Man: Blue is a re-telling of Spider-Man's "blue period" written by Jeph Loeb and illustrated by Tim Sale, who did it as part of a Thematic Series which also included Hulk: Gray, Daredevil: Yellow, and Captain America: White, and are better known for collaborating on the Batman comics The Long Halloween, Dark Victory, and Haunted Knight. The mini-series focuses specifically on Peter Parker's relationship with Gwen Stacy prior to her death.