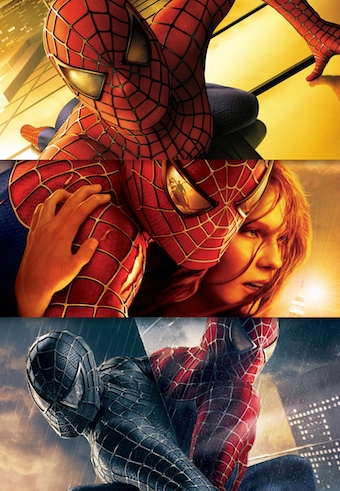 "Who am I? You sure you want to know? The story of my life is not for the faint of heart. If somebody said it was a happy little tale... if somebody told you I was just your average ordinary guy, not a care in the world... somebody lied."
— Peter Parker / Spider-Man
Advertisement:

A trilogy of Super Hero films based on the Marvel Comics superhero Spider-Man, all directed by Sam Raimi and running from 2002 to 2007. The films starred Tobey Maguire as the titular web-slinger, Kirsten Dunst as Mary Jane Watson, James Franco as Harry Osborn, Rosemary Harris as May Parker, J. K. Simmons as J. Jonah Jameson, and Bruce Campbell in various cameos. The official designation for the reality these films are set in is Earth-96283.

Three well-received video games (with Maguire, Simmons, and others reprising their roles), several mobile games, three novelizations, various bits of merchandise, and a few comic books are spun off from the films and set in their universe, plus a pinball machine and an infamous teaser trailer that was pulled from circulation due to The War on Terror.

Highly successful in both the critical and commercial departments, these movies helped cement the superhero movie boom by proving that Blade and X-Men before it hadn't been one-time charms. The success of this series led to other similarly-praised efforts, such as The Dark Knight Trilogy and the Marvel Cinematic Universe.

After a possible fourth film entered Development Hell, the franchise received a Continuity Reboot with an all-new creative team with The Amazing Spider-Man Series, with Spider-Man played by Andrew Garfield. Eventually, that setting was rebooted when it was announced that the character would be integrated into the Marvel Cinematic Universe, following an unprecedented deal between Sony Pictures and Marvel Studios, with Tom Holland as the wall-crawler in the MCU Spider-Man Trilogy.

Additionally, "Peter Parker" and "Peter B. Parker" in Spider-Man: Into the Spider-Verse take some visual influence from this iteration of the character, having gone through Broad Strokes versions of this Peter Parker's adventures, although they are their own iterations.

Tropes used throughout the series include: