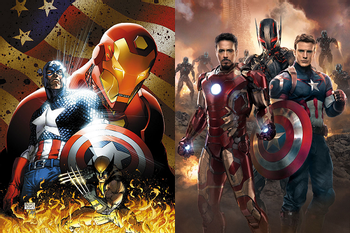 If a character is reasonably popular, through cartoons, comics, or general folklore, they'll probably have some kind of iconic visage. Sometimes this visage involves wearing a mask, helmet, heavy makeup, or otherwise concealing or altering the character's face. This is a fairly straightforward concept when the character is just a drawn image on a page.

But what happens when such a character is brought over into live-action? In the world of Hollywood, any actor with the clout to play said character is probably recognizable to the degree of bankability. Therefore the actor and producers will want the audience to see the actor's face as much as possible, particularly during highly dramatic moments. This isn't just about vanity - an actor's face and facial expressions are vital in "selling" the acting in a medium such as film where body language matters. (Keep in mind that comic books, animation and prose narratives offer other methods of conveying the same information, rendering it less important to see the character's true face.)

Another factor to consider is that masks, prosthetics, elaborate costumes, Motion Capture suits, etc. can become very uncomfortable if worn for extended periods. The filmmakers may also feel that a character's classic get-up just looks too silly if the character is doing anything but fighting.

As a result, the film ensures that our strange-looking character is reverted back to a less-costumed face (often by way of an Anti-Climactic Unmasking), and they may stay that way until the film's climax.