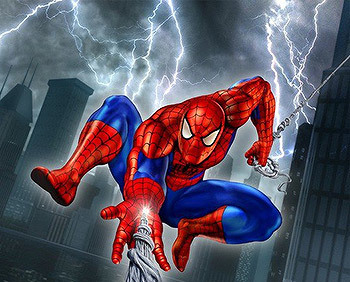 I'd say that looks more like cord than thread.
"He flies through the air with the greatest of ease..."
— Spider-Man
Advertisement:

A common means of travel for a non-flying Super Hero. It's almost as cool as flying, and there's no need to have any supernatural powers at all, just action-oriented plot powers and a strong stomach. Just leap, grapple, release, repeat. Watch out for that tree! *BOOM*

All you really need is something to swing on, and something it can hang from. (And sometimes, it doesn't even need that!)

Most times, the swinging is accomplished by use of some type of Plot Technology Grappling-Hook Pistol, that is somehow able to pull the weight of the hero (and often a passenger), and store an implausibly long cord (usually a very thin one for how much weight it holds). See also Instant Knots.

Often, the swinging violates laws of physics that are better left alone. It's hard to do realistically in live action and is not often used there. (The '70s Japanese live-action version of Spider-Man made very limited use of web-swinging, relying more on a flying car and a giant robot/spaceship.) For a similar conveyance technique used more often in Anime, see Roof Hopping. If you are looking for the traditional Tarzan approach to jungle navigation, see Vine Swing. Common in the toolbox of a Spider-Man Send-Up. Compare Fast-Roping.

The technology, if not the skill, behind grapple-and-swing maneuvers was partially busted (and partially confirmed) by the MythBusters in 2007.