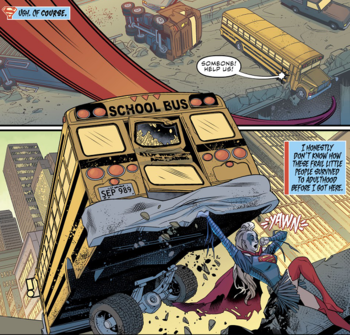 "Hit 'em where it hurts: In the civilians."
Black Siren: Flash, look!
[Flash sees a truck full of dynamite on a collision course with a bus full of nuns, who gasp and cross themselves]
Flash: You've gotta be kidding.
— Justice League, "Legends"
Advertisement:

Sometimes, saving an Innocent Bystander from Doctor Demonica just won't cut it: you need more impact to showcase just how dire the threat is and make the scene exciting. Enter the Bus Full of Innocents.

Despite the name, it doesn't have to be a bus. Any vehicle or enclosure full of Innocent Bystanders will do, and likewise any kind of person can be put at risk, though usually it will be people who are stunningly innocent, defenseless, and respectable to most viewers.

Common set ups are for the bus to be teetering perilously on a broken bridge or cliff, and a villain to use it in a Sadistic Choice along with the Love Interest.

Major hero points for the super dude who saves it. It's the hero publicity equivalent of a politician kissing babies.

Not to be confused with "Bus Full Of Nuns", the old name for Arson, Murder, and Jaywalking. Buses full of nuns are popular for this trope, though. Also has nothing to do with Passing Judgment.