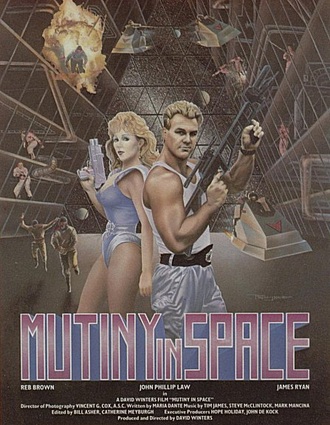 The poster doesn't get the title right, and the golf carts didn't fly, but everything else is disturbingly accurate, including the railing kills.
Advertisement:

Space Mutiny (also known as Mutiny in Space) is a legendarily bad 1988 South African science-fiction action film starring Reb Brown about, surprisingly enough, a mutiny aboard the spaceship known as the Southern Sun.

The Southern Sun is a seedship, a spacefaring vessel full of colonists out to settle a new world. Its voyage has lasted generations, so many of its inhabitants have been born and will die without ever setting foot on solid ground. This does not please the antagonist, Elijah Kalgan (not be confused with Calgon

), who conspires with the pirates infesting the nearby Corona Borealis system and the ship's Chief Engineer MacPhearson. Kalgan hatches a plot to disrupt the Southern Sun's navigation systems and use the Enforcers, the ship's police force, to hijack the ship and direct it towards this system. At this point, the inhabitants of the Southern Sun will have no choice but to accept his 'generosity'.

Kalgan sabotages the vessel's guidance system just as an important professor's shuttle is on a landing trajectory, causing it to crash (offscreen). The ship's pilot, Dave Ryder, is able to escape, but the professor dies in the explosion. This sabotage seals off the flight deck for a number of weeks, allowing Kalgan and the Enforcers to hold the entire population of the Southern Sun hostage. Commander Jansen and Captain Devers enlist Ryder's assistance, aided begrudgingly by Jansen's daughter Dr. Lea Jansen, to regain control of the ship.

Space Mutiny was filmed in South Africa during The Apartheid Era (a fact understandably not mentioned on the end credits — see also Prisoners of the Lost Universe, Golden Rendezvous, Hellgate, etc.), which some viewers think ties in to all the pseudo-fascistic goings-on (and explains the all-white cast, not that that was exactly unusual in Hollywood action movies of the time). The film also borrows almost all of its spaceship footage from Battlestar Galactica, including using the Galactica itself as a stand in for the Southern Sun.

For the Mystery Science Theater 3000 version, please go to the episode recap page. The film was also featured on RedLetterMedia's Best of the Worst.

Example of:
Made of Explodium