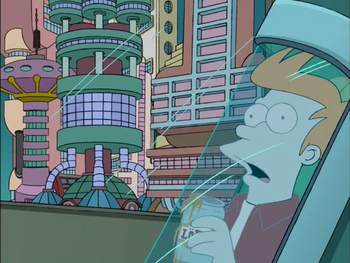 The poor man's Time Travel — unfortunately, it's one-way, unless time is cyclical.

Cryonics, as Applied Phlebotinum, is a mechanism by which a person can be frozen, halting the aging process and giving them a non-stop ticket on the Suspended Animation Express to the future. Once they get to the future, they can be thawed out and reanimated.

The result is that we get a Fish out of Temporal Water setup wherein a human — usually the audience's approximate contemporary — is thrust into The Future and has to adjust to their new environment. This can get especially thorny if their home or civilization has since been destroyed and forgotten, or changed beyond recognition, making them a Living Relic.

It also works with the past, as many works have played with the idea of turning a prehistoric caveman or a viking loose in modern society. In this case, of course, the freezing has to be by natural means which stretches the credibility of Harmless Freezing even further. (This is more the realm of cartoons and soft science fiction that can get away with it more easily)

Cryonics, the study of preserving humans or other organisms at low temperature, is frequently confused with cryogenics, the creation of very low temperatures and the study of how materials behave under those conditions. Honestly, just because a word has "-gen-" in it doesn't mean it has anything to do with biology.

Cryonics Failure, where something goes horribly wrong that kills some or all sleepers, is a potential danger.

The Human Popsicle usually takes one of three forms:

The ability to freeze and later revive some simple organisms — including human embryos — has existed for some time (one motivation of cryonics is that some animals have an innate ability to survive a similar naturally induced state), but there are many technical problems with applying this to a fully grown humannote  Namely, not all of your organs "freeze" at the same temperature, some react well to freezing while others react poorly, and unfreezing someone is an iffy proposition at best, usually resulting in significant organ damage. And the law does not allow people to be cryonically suspended until they are pronounced clinically dead (or if they aren't legally alive yet, like the aforementioned embryos), which could cause problems if brain damage occurs due to anoxia. For the sake of television, we just assume that whoever does the thawing has the technology to overcome this. Sometimes this problem is Hand Waved by claiming that what's actually going on is some sort of localized time stop (Time Stands Still, except inside out), although all other aspects of the trope remain the same.

In science fiction, cryonics is often either used for something that makes little practical sense or forgotten entirely when it could potentially save the life of a person killed in an accident. An example of the former is using cryonic freezing for incarcerated criminals. The various rationales that justify it range from relative safety and cheapness compared to feeding, housing, and guarding prisoners on the taxpayers' expense to being an alternative to the death penalty. However, it undermines the punishment aspect of incarceration. Being able to sleep through your long sentence and not have to endure the daily ugly aspects of prison life is not much of a deterrent to criminal behavior. And since one does not age in cryonic prison, life sentences are pointless and the prisoner has served time without having lost a significant portion of his lifespan. He may even outlive his original jailers or former victims. Today, prison sentences of over a hundred years are given only to ensure that the felon will never be eligible for parole in his lifetime. With cryonics, this prisoner will effectively be awakened in an era that he would not have lived to see otherwise. In many stories that heavily rely on the death of Red Shirt characters to amplify drama and suspense, it never occurs to anyone to place these dead minor characters into cryonic suspension so that their lives may be saved later. And this is almost always in future worlds that should have cryonic suspension and the medical knowledge to reverse clinical death in cases of injuries or accidents.

If you happen upon someone else who has been frozen, read all the manuals before thawing them out: nine times out of ten, they will turn out to be psychopathic murderers (just ask the crew of Red Dwarf).

Monster in the Ice is something of a naturally-occurring sibling to this trope, as oftentimes the giant creatures that somehow ended up locked inside a glacier or iceberg will remain in a form of suspended animation until, eventually, the ice melts and deposits the beast in a distant, changed future.

Often overlaps with Really 700 Years Old, but the people from this trope rarely experience the time in-between freezing and thawing.

Often necessitates Catching Up on History to see what's happened since they were frozen.

A 1950s g-man cryogenically frozen by an evil Nazi conspiracy and thawed out in the present day. He's opened a private detective agency out of the back of a tire shop, where he struggles to deal with a alien and vaguely hostile modern world in the "Frozen '50s Man" show.

A 1950s g-man cryogenically frozen by an evil Nazi conspiracy and thawed out in the present day. He's opened a private detective agency out of the back of a tire shop, where he struggles to deal with a alien and vaguely hostile modern world in the "Frozen '50s Man" show.