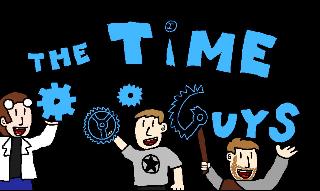 "No, not the 'Time Guys', but 'The TIME... GUYS!'"
"The Time... Guys" is a web series documenting the adventures of the eponymous team, comprised of Dr. Carlos Chronos, D.D.S.; Timothy Ward; and Caveman as they travel through time, encountering historical figures that all look suspiciously similar. The complete series can be found here