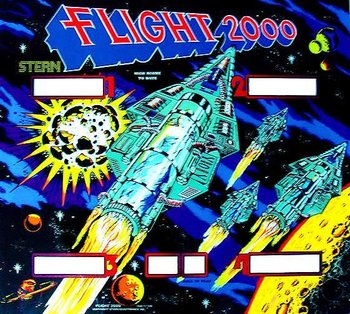 Flight 2000 is a widebody Physical Pinball Table released in 1980 by Stern Electronics. It was designed by legendary industry veteran Harry Williams, and features artwork by Gerry Simkus and Doug Watson.

As Stern's first talking pinball game, Flight 2000 requires the player to prepare and launch three rockets into space. This is done by hitting targets around the playfield to spell BLASTOFF, then locking a pinball into the playfield's three-stage launcher. Do this twice, then knock down the Countdown targets in reverse order. Once this is done, load the last pinball into the launcher to cycle the launch sequence and initiate three-ball multiball.

Although it sounds very simple in theory, players found it a challenge in practice, and achieving multiball soon became a matter of pride for the best players. Flight 2000 was lauded for its fast, uncomplicated, yet formidable gameplay, and many call it one of the best games from Stern Electronics.

A digital version is available through FarSight Studios' The Pinball Arcade. 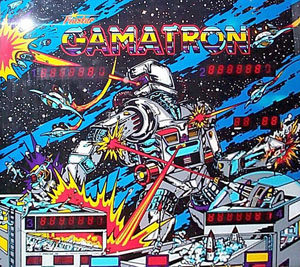 After the closure of Stern Electronics, Gary Stern started a company called Pinstar. One of Pinstar's early products was Gamatron, a conversion kit for Bally and Stern pinball tables. Gamatron was essentially a copy of Flight 2000, using the same software and a minor variant of the playfield to accommodate standard-width cabinets. Unfortunately, Gamatron lacked many of the features that were popular in pinball games of the mid-eighties, and only a few kits were sold.