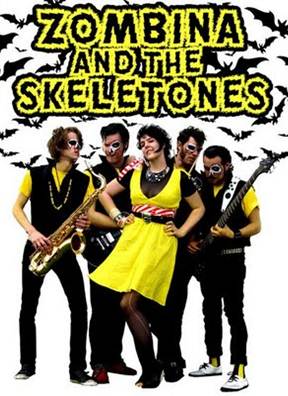 Horror in the same vain (or vein) as, say, The Munsters.
Advertisement:

Zombina and the Skeletones, a horror-themed pop punk band from Liverpool, England, began in 1998 when Zombina and songwriter Doc Horror partnered up as teenagers to create a band called The Deformed. Legend has it that they changed their name at one of their first shows, coming up with their current moniker backstage as a reference to Josie and the Pussycats and allowing the audience to vote on the proposed change. They have since released five albums and numerous EPs and singles, with Zombina and Doc Horror being the only consistent members.

Their music typically takes inspiration from various B Movies, often from horror and science fiction. Their specific sound often blends pop elements from the 1950s and 1980s, giving them a following amongst fans of horror punk, gothic and psychobilly, among others.