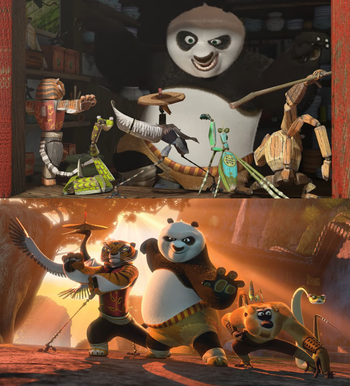 "To become a crime fighter you have to study Batman movies. But even better than studying his movies is if you can follow him around and do what he does in real life."
— Axe Cop
Advertisement:

Some fans are a cut above the regular otaku. For most, it is as simple as being hired to work in the industry that deals with the media you love, but in fiction, it can take a whole new meaning. The Ascended Fanboy/Fangirl is that lucky one-in-a-million with a hobby based on something imaginary which does not stay imaginary—it turns into reality, and he becomes a part of it himself.

A variation is where it is imaginary to us but not in the context of the world, such as a mecha fan, in a world full of mecha, getting to pilot one.

For those lucky few, they receive the Call to Adventure, and ask: "How high?" Naturally, it is never so easy or glamorous as they thought it would be, but they've got the right stuff, and a whole lot of Beginner's Luck to last them until it comes out. As a side effect, they're usually Genre Savvy, sometimes to the point of excess. Of course you know, he could be wrong.

Often a former The Team Wannabe. Who the fan works for is often their idol. Subtrope of Audience Surrogate. Compare The Knights Who Say "Squee!". Contrast with Loony Fan. See also I Know Mortal Kombat, which often results in this.

Note: This trope is for in-universe examples. For the Real Life counterpart, see Promoted Fanboy.

This has nothing to do with that kind of ascension, at least unless the fan really likes Daniel Jackson.