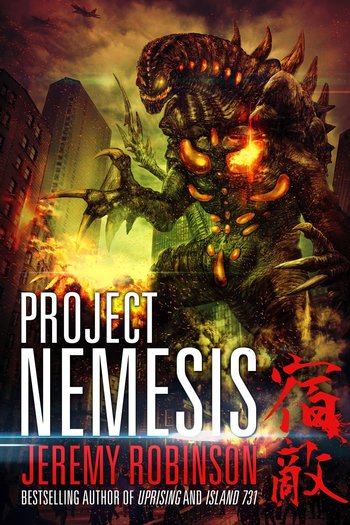 The Nemesis Saga is a Kaiju thriller series of novels written by Jeremy Robinson. The first book, Project Nemesis, was published in November 2012.
Advertisement:

Jon Hudson, lead investigator for the Department of Homeland Security’s Fusion Center-P, thinks his job is a joke. While other Fusion Centers focus on thwarting terrorist activity, Hudson’s division is tasked with handling paranormal threats to national security, of which there have been zero during his years at the DHS. When yet another Sasquatch sighting leads to a research facility disguised as an abandoned Nike missile site in the back woods of Maine, Hudson’s job becomes deadly serious.

Hudson and the local Sheriff, Ashley Collins, suddenly find themselves on the run from a ruthless ex-Special Forces security team, but the human threat is short-lived as something very much not-human destroys the facility and heads for civilization, leaving only a single clue behind—a name scrawled in blood: Nemesis. Working with his team at Fusion Center-P, Sheriff Collins and a surly helicopter pilot named Woodstock, Hudson pursues the creature known as Nemesis, attempts to uncover the corporate secrets behind its creation and accidental release and tries to comprehend why several clues lead to a murdered little girl named Maigo.

But as the body-count explodes, along with the monster’s size, it quickly becomes clear that nothing short of a full military response can slow Nemesis’s progress. Coordinating with every branch of the U.S. military, Hudson simultaneously searches for clues about Nemesis’s origins and motivations, and leads the counterattack that will hopefully stop the monster before it reaches Boston and its one million residents.

The fourth book, Project Hyperion, was published in September 2015, and features series' first mech, the titular Hyperion. The fifth and final book, Project Legion, was released in October 2016. A six issue comic book series based on Project Nemesis, with art by Matt Frank, was published in late 2015 and early 2016. A comic adaption of Island 731 with art from artist Jeff Zornov, also of Rulers of the Earth fame, was announced for August of 2016, but was later cancelled.

The title monster has also been announced for the video game The Fall of Nemesis: Clash of the Kaijujin as the main antagonist and a playable character in the roster, prior to Jeremy Robinson's contract with Sunstone Games expiring in January 2017.

In 2022, it was announced that Project Nemesis would be getting a TV adaptation produced by Original Film and Sony Pictures Television, and directed by Chad Stahelski.