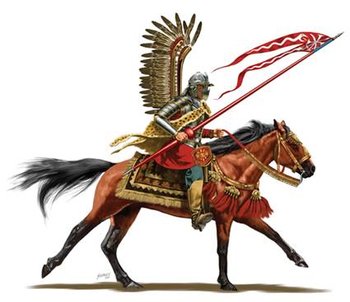 A Polish Winged Hussar, preparing to provide air support against Tsarist Russia.
"They might look fancy, but the truth is that they really don't work at all."
— Haibane Renmei
Advertisement:

A character has, obtains, or shows wings. These wings don't do anything. They don't help the character fly. They don't throw lasers. They don't flap! They don't even eat people! Even if you are able to fly (whether or not you could before), the wings clearly aren't responsible in the traditional aerodynamic sense. They just appear because they look cool. This trope is for all wings that don't have an actual use, regardless if they are won from an upgrade, appear in the character's real forms, or they have been all the time in the character.

This trope appears principally in Video Games and Anime.

Related to Power Gives You Wings, and to a lesser extent, Awesome, but Impractical and What Do You Mean, It's Not Symbolic? See also Good Wings, Evil Wings, as these useless wings may serve for identifying a character at least.

Compare Goggles Do Nothing, for clothing and accessories that are there for the sole purpose of looking cool. See also Stationary Wings and the possible justification, on aesthetic grounds, in Symbolic Wings. If the wings work sometimes, but not when it would actually be useful, it's a case of Acrophobic Bird.