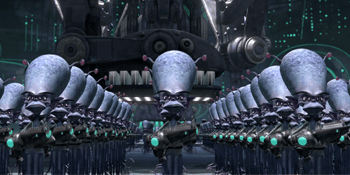 Bringing new meaning to the phrase "One-Man Army."
"We shall take only the greatest minds, the finest soldiers, the most faithful servants. We shall multiply them a thousandfold and release them to usher in a new era of glory."
— Col. Corazon Santiago, "The Council of War", Sid Meier’s Alpha Centauri (Accompanies completion of the Secret Project "The Cloning Vats")
Advertisement:

A common source of soldiers in science fiction is cloning. This can make sense if you want to mass produce one exceptionally good soldier or don't want to spend much time creating and raising an army of Designer Babies from scratch. Typically they grow to adulthood at an accelerated rate as well. But depending on how it is done, Fridge Logic may reveal that given how difficult assembling a single amoeba would be, mass chemical fabrication of multiceular human bodies would be the most counterproductive thing ever, and so choosing to do this rather than recruit them from amongst the populace where all that has already been done for them like normal is far costlier.

Related to Send in the Clones. Often overlaps with Expendable Clone and Faceless Mooks. May be used to justify We Have Reserves tactics. If the clones are a unique race they may form a Henchmen or Servant Race.

Dr.Coomer uses his plethora of clones to try and take over Gordon's body.

Dr.Coomer uses his plethora of clones to try and take over Gordon's body.