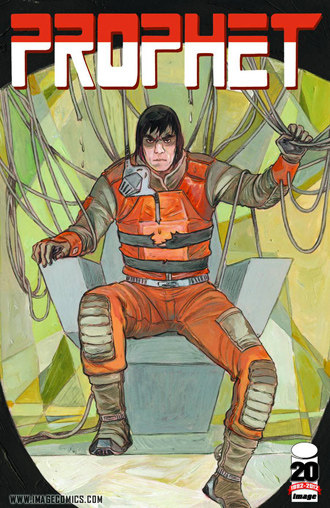 In the distant future, a man awakens on an alien planet. Instinctively, he sets out on a mission, using his inherent warrior skills to face off with strange creatures and cultures. Then it happens again. And again.

John Prophet was the ultimate warrior for The Empire. He was so valued by them that he was cloned. Thousands of times. Now, tens of thousands of years later, after the Empire has fallen into disrepair, sleeper clones are activated to help re-establish this vast interstellar power, carrying out individual missions and sometimes teaming up with other clones to help their Queen. The only thing in the way of their shared mission? An ancient, warrior John Prophet, who is assembling his own Rebel Alliance to fight off the return of the Empire.

The series is a not-quite Continuity Reboot of Rob Liefeld's character of the same name, a 1920's vagrant bio-engineered to be the ultimate soldier for an evil magnate, then secretly reprogrammed by his creator to do good, all while hopping around time and losing his memory. The new series starts at issue 21, and is technically a Revival, but it disregards almost every element of the original run to do something very different.