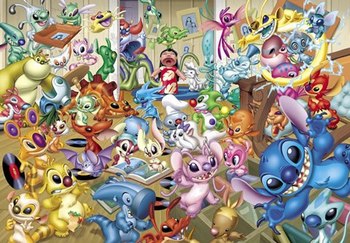 You thought your pets were hard to take care of? Look what Lilo has to deal with!
note If you need to know who's who in this image, The Other Wiki has them covered with annotations.

◊ for a full-sized image.
Advertisement:

This is the character sheet for the many genetic experiments made by Dr. Jumba Jookiba (in other words, Stitch and his "cousins") in Disney's Lilo & Stitch franchise, most of whom debuted in Lilo & Stitch: The Series, with some having debuted in the anime series, Stitch!.note Stitch & Ai introduces new experiments made within the events of that series but doesn't feature any of the classic experiments besides Stitch himself. The numbers of the experiments are almost-exclusively pronounced as individual digits (e.g. Stitch is "Experiment Six-Two-Six", not "Experiment Six Hundred Twenty-Six"). 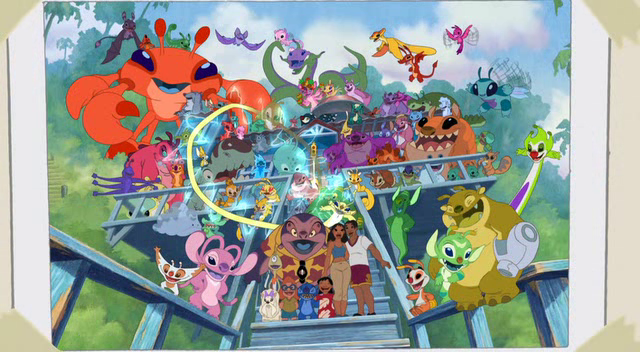 The assorted experiments created by Jumba Jookiba were scattered across the island as a result of The Series' pilot movie. Lilo and Stitch made it their mission to seek out all of them and reform them for good.

As of 2019, 125 of Jumba's experiments (not including the Chinese ones he made in Stitch & Ai, nor the 700 series that exclusively appeared in Stitch: Experiment 626 for PlayStation 2) have appeared in official media with their names, numbers, and abilities confirmed. Along with Stitch (X-626), this includes Chopsuey (X-621) from Stitch: Experiment 626, seven experiments introduced in Stitch! The Movie, 91 experiments introduced in Lilo & Stitch: The Series,note 44 in season one (including the unnamed Experiment 627) and 47 in season two Coco (X-052) from Comic Zone: Lilo & Stitch,note The comics also had Slobber (X-347) and Hisee (X-531), but they appeared only in the decanonized prequel comics well before they would be given names, and their functions were never revealed. Thus, they don't count towards this number. There's also Tippy, who does not have an official number and is really more of a very high-tech doll whose canonicity is disputable (Jumba might have called her an "Experiment" out of force of habit, but then again, he is known to be a Bad Liar), so she doesn't count either. Not only that, only Coco was confirmed by Jess Winfield. thirteen experiments introduced in Leroy & Stitch,note including Leroy, who was officially designated X-629 in a Disney Tsum Tsum side story of the spin-off manga Stitch & the Samurai and eleven experiments introduced in the Stitch! anime.note This includes Cyber (X-000), who does not appear in the experiments list in Leroy & Stitch and is a completely unique addition added in by anime's production staff, but does not include Skunkuna (who was made by Dr. Hämsterviel instead of Jumba, at least according to the English dub and Jess Winfield), the Sproutlings (X-509-A, who are the offspring of X-509/Sprout), and Dark End (who was created by the antagonist of the anime's third season, Delia).

All the subpages below focusing on individual series of experiments (named after their first digits) feature lists containing each experiment's name, number, pod color (if seen), a description about them (if seen or mentioned), and any appearances they've made between the films, the TV shows (including specific episodes of Lilo & Stitch: The Series), and other media. Some of the more notable experiments even have their own folders.

The general descriptions for each experiment series are as described by The Series executive producer (and the current voice of Dr. Jumba Jookiba himself) Jess Winfield unless noted.