This is the character sheet for the namesake human-alien duo of Disney's Lilo & Stitch franchise. 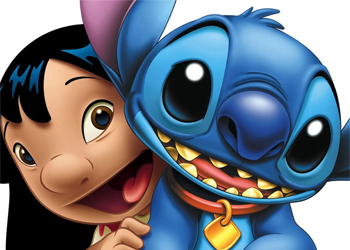 Despite being completely different species, both title characters are very much alike in more ways than one. 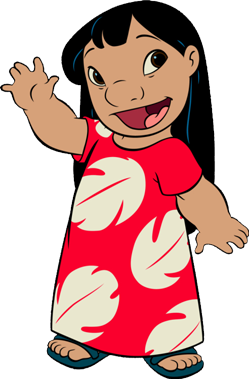 A young, orphaned Hawaiian girl who lives with her sister Nani and is Stitch's owner and best friend. She is the deuteragonist throughout most of the franchise.

In the original film, she and Nani had lost their parents in a relatively recent car accident. Lilo is a social outcast among her peers by the time the film begins, and her and Nani's relationship have become strained. After becoming at risk of being separated from her only remaining family member, Lilo wishes for a friend on a "shooting star".note A crash-landing spaceship that Experiment 626 stole earlier. At the shelter Nani takes her to, Lilo finds an unusual blue "dog" and adopts him as "Stitch". Despite his bad behavior, Lilo sees Stitch as a friend and, under social worker Cobra Bubbles's orders, tries to make him a "model citizen", though her efforts don't seem to work. It gets worse for her when Stitch and Jumba get into a fight that destroys her house. Rejecting Stitch (who reveals his true alien form to her) for ruining everything, the two are taken by Gantu, though Stitch escapes. She gets rescued by Stitch afterwards, then saves him from being taken away from her by showing her adoption paper to the Grand Councilwoman, who puts him under "exile" and makes Lilo his warden. This allows Lilo to stay with her sister and their new family with Jumba, Pleakley, and Stitch.

In Lilo & Stitch: The Series and its two films, she helps Stitch to find all 625 of his experiment "cousins", name them, and find them a "one true place" where they use their abilities for good.

After the 2006 end of the original parts of the franchise, Lilo's role has been greatly reduced from a main character to merely "someone from Stitch's past". She does not appear in the Stitch! anime except for a third season episode where she reunites with Stitch as an adult with a daughter named Ani that looks exactly like her when she was younger. She also only appears in flashbacks in Stitch & Ai, which shows that she and Stitch were forcibly separated when he was kidnapped by space criminals. 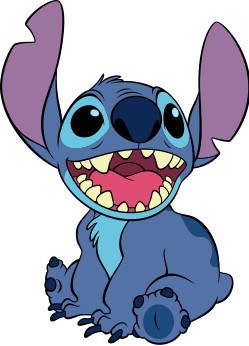 Stitch in his disguised "Earth dog" form. To see his true alien "Experiment 626" form (and other forms he had over the years), click here.
"This is my family. I found it, all on my own. It's little, and broken, but still good. Yeah. Still good."
Voiced in English by: Chris Sanders, Ben Diskin (Stitch!, Stitch & Ai)
Voiced in Japanese by: Kōichi Yamadera note Yamadera also voices the character in The Enchanted Tiki Room: Stitch Presents Aloha, e Komo Mai!, which is not available in English
Voiced in Mandarin Chinese for Stitch & Ai by: Li Zhengxiang
Appearances: Lilo & Stitch | Lilo & Stitch 2: Stitch Has a Glitch | The Origin of Stitch | Stitch! The Movie | The Series | Leroy & Stitch | Stitch! | Stitch & Ai
Appearances in alternate continuities: Lady and the Tramp | Beauty and the Beast | The Lion King | House of Mousenote online games only | Brother Bear | The Lion King 1½ | Kingdom Hearts | Disney Universenote as a costume only | Disney Infinity | Disney Magic Kingdoms | Disney Heroes: Battle Mode | Disney Sorcerer's Arena

A blue koala-like illegal genetic experiment created by Jumba Jookiba who was designed to "destroy everything he touches", but ended up defying his programmed function after being adopted by Lilo as her pet "dog". He is The Protagonist of the franchise.

In the original film, he was sentenced to exile on a desert asteroid after showing himself to be irredeemable to the United Galactic Federation. He escapes from custody and crash-lands on Earth, where he is adopted by Lilo. He initially only uses her to avoid being captured by Jumba and Pleakley, but then he grows to care about Lilo after spending time with her and Nani, which left the creature designed for chaos and destruction "lost" after seeing how his primary function caused his little adopted family's problems to become worse than they already were. Eventually, he and Lilo get captured by Gantu, though Stitch manages to escape. With Nani, Jumba and Pleakley's help, he rescues the little girl, but he finally gets arrested again by the Galactic Federation upon returning to shore. Although now a reformed creature, Stitch was ready to accept his fate this time around. However, after Lilo proves her ownership of him to the Federation, he is allowed to stay on Earth with his new family under supposed exile.

Throughout Lilo & Stitch: The Series and its two films, Stitch finds out about the 625 other experiments that Jumba made before him, and he and Lilo resolve to find all of them after the experiments' pods were scattered across Kauaʻi. Regarding the other experiments as his "cousins" (save for his significant other X-624/Angel), the two manage to find, name and reform all of them by giving them a "one true place" where they use their abilities for good. After accomplishing their goal, he was made a captain of the Galactic Armada, but he later decides to give up the position to stay with Lilo on Earth.

His "one true place" is, of course, with Lilo as part of her ʻohana. However, two later TV series separate him from Lilo. In the anime Stitch!, he leaves Lilo during her college years over a misunderstanding and ends up on the Okinawa Prefecture in Japan, getting a new human friend named Yuna Kamihara. In the Chinese animated series Stitch & Ai, he instead gets taken from Lilo by alien mercenaries and then crashes in the Huangshan mountains of China, where he gets taken in by a different human girl named Wang Ai Ling. Also, supposedly according to that show, he has previously unrevealed metamorphosis abilities that gives him a few mutations, most notably a giant monstrous form that makes him even more powerful than he already is to carry out further levels of destruction.