Western Animation / The Origin of Stitch 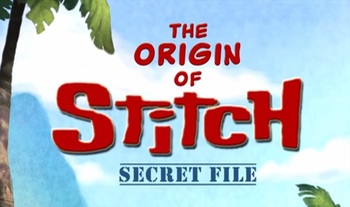 The Origin of Stitchnote also known as The Origin of Stitch: Secret File on the title card as seen on this page is a 2005 animated short film in the Lilo & Stitch franchise. It was directed by Mike Disa with Tony Bancroft as co-director, and produced by Toonacious Family Entertainment with coloring done by Powerhouse Animation. It is included on the DVD release of Lilo & Stitch 2: Stitch Has a Glitch and serves a bridge between that film and Stitch! The Movie (the short primarily serves as a prologue of that and Lilo & Stitch: The Series).
Advertisement:

After Stitch (voiced by Chris Sanders) tries to retrieve a soccer ball he was playing with from Jumba's ship, he finds Jumba's secret computer (voice provided by Tress MacNeille), which reveals to him what strange and horrible creatures were used to make the otherwise cute and fluffy experiment, shows him hints of the other experiments Jumba made, and reminds him about his original destructive purpose. The little blue alien is dismayed by this revelation until Jumba (voiced by David Ogden Stiers) comes in to tell him that despite defying his destructive programming, Stitch is Jumba's greatest creation because of both that and his discovery of love and ʻohana through Lilo.

The Origin of Stitch: Secret Tropes