So Proud of You 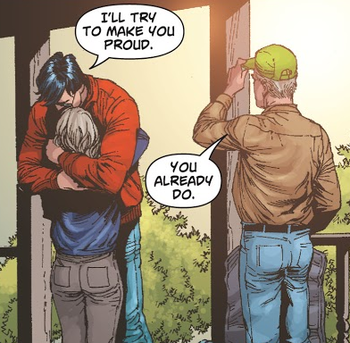 "You are nearly there. Very close. We are... so proud of you."
— James Potter, Harry Potter and the Deathly Hallows
Advertisement:

How can this be fittingly celebrated? Why, have them be told how proud people are of them!

Normally this is said only by people who have reason to be proud: their parents, a Parental Substitute, their mentor, the Team Dad, A Father to His Men, etc. This is usually done for a young hero, whose skills might have been in doubt, and had unquestionably been formed by the person saying it. It may happen very early in the story, as proof that they are ready for the call, but is more common at the end to validate their Character Development.

May also be a form of encouragement after a character has progressed a certain amount but is feeling discouraged.

There is the form "I'm so proud of you." Or "We are so proud of you," if one can speak for more than one (such as a mother or father for both parents).

Then there is the form "Your father would have been so proud of you." Normally addressed to fatherless heroes, though any Disappeared Dad may qualify them. May be spoken by the mother, or by any other mentor. They may not want, even in this moment, to have a Not So Stoic moment, and so distance themselves from the praise. They may be aware that the child craves his father's approval, and would value this. They may also not want to claim too much credit, since saying "I am so proud of you," implies that they have a reason to be proud.

While "father" is the most common, "Your mother (or other figure) would be so proud of you," is also possible, in similar situations. "You should be proud of yourself" is another alternative, which ascribes even more of the credit to the person themselves.

This is, in fact, what the "Well Done, Son!" Guy craves, but the hero has not usually been striving with their eye on it, and the speaker is willing to tell them, freely.

This trope can also be Played for Laughs when the child does something despicable or even outright criminal, and the parent approves of their deviant behavior. The Doting Parent does this all the time, and gushingly so, which means the one they are so proud of is likely terribly embarrassed. Alternatively, the trope Don't Tell Mama exists because a crook wants to hear this and doesn't want their parents to be disappointed in them for taking up a life of crime.

Contrast It Has Been an Honor, where the character is usually addressing someone he has not formed, though he may have led him. Also contrast Disappointed in You.

See Your Approval Fills Me with Shame for when they don't want this praise.