All spoilers for The Lion King are unmarked. You Have Been Warned! 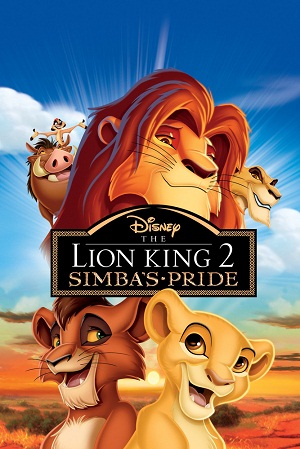 "We are one."
Advertisement:

Following on from the previous film's epilogue, Simba has assumed kingship of the Pride Lands after Scar's defeat and gained a daughter with Nala named Kiara. As she grows older, the princess becomes rebellious towards her father's rules and falls in love with Kovu, a lion from a banished pride called the Outsiders. The other pride's members were ousted by Simba because they refused to submit to him and continued to follow Scar, even in death. Scar's former follower Zira, Kovu's mother, sees her son as the reincarnation of Scar's legacy and plots revenge against Simba through her son's romance with Kiara.

As the previous film was largely a loose adaptation of William Shakespeare's Hamlet, this film is largely a retelling of Romeo and Juliet mixed with elements of Macbeth.

The events of The Lion Guard's third and final season are set in parallel with the film's second act, with the finale serving as a TV sequel.

Pumbaa and Timon get into a disagreement over which grub tastes better, unknowingly allowing Kiara to wander off unguarded.

Example of:
Argument of Contradictions

Pumbaa and Timon get into a disagreement over which grub tastes better, unknowingly allowing Kiara to wander off unguarded.