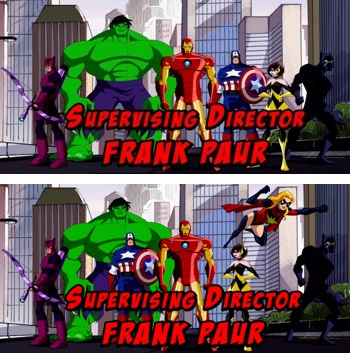 "I'm just glad there's finally another girl on the team!"note The top picture illustrates how the roster (and Evolving Credits) looked in episodes 27-30, while the bottom comes from episodes 31-33.
"I never really liked to talk about it, but it wasn't always easy being the only female Avenger. Wanda helped some, but it was still lonely at times."
— Natasha, Returning the Stones
Advertisement:

A female character added to a new season, spinoff, or sequel to balance out the sexes.

If she's the first woman in a previously all-male cast, this is just The Smurfette Principle at work and she's probably The Chick or The Heart. But if she's added when there's already a (single) woman in the cast, to counter the Smurfette Principle by adding more gender balance, then she's an Affirmative Action Girl. When this trope was in its formative stages (when Affirmative Action was still working its way into action-oriented fiction), such characters were usually Straw Feminists to boot. For bonus points, she might be a racial minority as well.

Note that despite the Punny Name, she need not be an Action Girl, but usually is at least a Tomboy to distinguish her from a pre-existing Chick.

If used well, she can genuinely enrich the story. But if she's just there and has no characterization or Character Development, expect the fandom to hate her for being shallow, badly written, too feminine, or not feminine enough, or a Creator's Pet.

Compare Affirmative-Action Legacy and Two Girls to a Team. See also More Diverse Sequel, which she can contribute to.