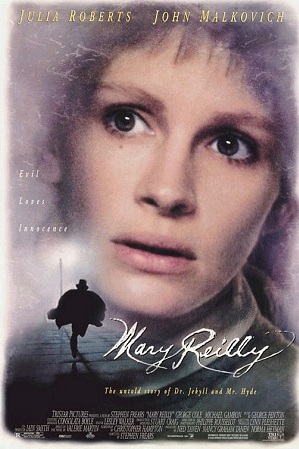 Did you ever wonder what The Strange Case of Dr. Jekyll and Mr. Hyde would be like if Jekyll, Hyde or both of them had a woman in their lives?

Mary Reilly is about an Irish maid in Henry Jekyll's household who becomes the confidant and love interest of Jekyll, the unwilling accomplice and object of lust for Edward Hyde and the suspension of disbelief replacement for the audience, since by now everyone and his grandmother knows the doctor's little secret.

The film starts with Mary and Jekyll gradually growing closer despite their social stations, as Mary unbends to him and tells him how her father used to beat her for breaking cups and locked her in a cupboard under the stairs with rats. Happy days. Naturally such happiness cannot last, as the doctor announces that he plans to have a new assistant. Of course the audience knows where this is heading, but the staff are naturally curious about this new man, especially since they never seem to be able to catch a glimpse of him.

Then, Jekyll begins to ask Mary to run errands for him - some less than tasteful, such as delivering a letter to Mrs. Farraday, the madame of a brothel, in order that his assistant can rent a room. Up late one night, Mary witnesses the self same assistant handing over a cheque for blood money. And when she finally meets the enigmatic Mr. Hyde, things soon spiral out of control for all three of them...

The film stars John Malkovich as both Jekyll and Hyde and Julia Roberts as Mary. Based on a novel by Valerie Martin, which was nominated for a Nebula and World Fantasy Award.