You're Cute When You're Angry 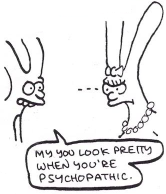 "You look wonderful when you're angry... just like an avenging angel."
— Albert, Brief Encounter
Advertisement:

Bob succeeds in pissing Alice off. Instead of running away fast, Bob tells Alice she's funny/cute/sexy when she's mad. This goes over as well as one might expect, though Bob probably wasn't trying to defuse the situation in the first place. Expect Alice to storm off, attack Bob, "attack" Bob, or inexplicably burst into tears.

Compare and contrast You Got Spunk!, a similar trope used for very different effect. May also occur in Slap-Slap-Kiss relationships, when one partner finds the other to be attractive while angry.