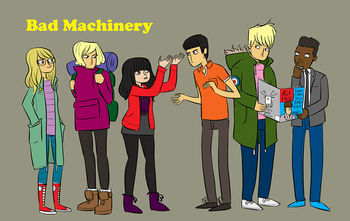 is John Allison's followup to the popular Scary Go Round, which itself is a followup to Bobbins. It takes place in the same strangely charming (and charmingly strange) British town of Tackleford three years after Scary Go Round and with some of the old characters from the prior comics. See Bobbinsverse for The 'Verse shared by all these comics. See here for The Verse's Character Page.

It follows a group of secondary-school (for Americans: Middle School heading into High School) kids; The girls consist of plucky ringleader-sleuth Shauna Wickle, the endearingly simple Charlotte "Lottie" Grote, and wild child Mildred Haversham. The boys are Adorably-Precocious Child investigator Jack Finch, justice-obsessed Linton Baxter, and the sensitive Sonny Craven. The kids attend Griswalds Grammar School and get into all manner of capers and hijinks typical of living in Tackleford.

Initially focusing on the group of children detectives as a whole, the stories evolved to focus on and develop one or two main characters for a story's duration. The supernatural elements are toned down slightly from Scary Go Round, though it retains John Allison's signature bantering character interaction and unique way with words, though he's said that the language is less complex than SGR's, partly because of the younger cast and partly because he'd grown out of it.

On the 3rd of November 2014, Allison announced that Bad Machinery as such would end with the just-completed story, as he felt that the characters had "outgrown the setting, the premise and the format". He promised that the characters would return eventually, under some other title, but possibly not for a little while. Many of the characters then showed up in the Into The Woods storyline of Bobbins, and later a new story, Space Is The Place

, featured the girls from Bad Machinery, but was not labeled as part of this (or any other) ongoing strip.

As of July 2015, Bad Machinery returned with "The Case of the Missing Piece," picking up where Space Is the Place left off. After that finished, the Bad Machinery title also showed up on a 2016 story, "The Big Hiatus", that followed on from the last Bad Machinery case and from "Bobbins: Into The Woods". This was followed by a short side story "Desmond Fishman: Better Than Nothing" which led into "The Case of the Severed Alliance".