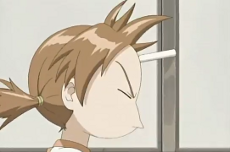 I'm a pretty unicorn!
Mr. Ushimaru: You! Pay attention! Is that how you listen when someone's talking to you!?
Joker: (thinking) I feel a murderous intent...!
—Persona 5
Advertisement:

A teacher or other instructor throws chalk pieces (or other small objects) at their distracted pupils. Often the scene will first focus on one or two students not following the class, before an unidentified object flies towards them and gets their attention back to an irritated teacher.

This is usually Played for Laughs, and the chalk will be thrown with uncanny accuracy at the kids' heads, showing that the teacher has a long "experience" in this domain. The Badass Teacher and Sadist Teacher will often use this technique as a way to quell troublemakers; the Stern Teacher also occasionally gets in on it.

Chalk chucking is a Discredited Trope in Real Life Western education systems; a teacher throwing things at their pupils is likely to find themselves out of a job in short order.

See also School Teachers. Nothing to do with the series ChalkZone.

Nozomi isn't paying attention so the instructor nails her with her chalk.

Nozomi isn't paying attention so the instructor nails her with her chalk.