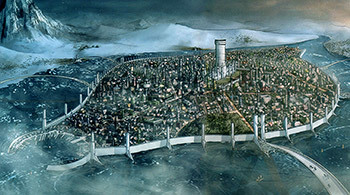 Frequently in fiction, your typical city tends to take the view that when it comes to defense, Crazy-Prepared is good. Very good.

In fantasy or medieval settings, such a city will always have high and thick walls, which usually enclose the entire city. The walls will constantly be patrolled by a sizable force of guards, who are very well armed, armored, and trained. These guards will also frequently have ready access to heavy artillery for defensive use, including catapults, ballistae, and/or even (if the setting allows it) cannons.

More modern settings will feature naturally updated defenses, from electric fences to bomb shelters. Futuristic settings will have Force Fields, automated turrets, and even more strange and novel mechanisms. One which protects large areas of land around the city may surround them with The Great Wall.

Of course, the practicality and costs of creating and maintaining these defenses will never be brought up, as well as the original reasons for creating said defenses. This usually means that these defenses vaguely imply a Crapsack World; after all, there would have to be some justification for those preparations in the first place, even if it's never explicitly stated.

If these defenses are put to the test (and they usually will be), the results will vary, depending on the work. These can range from the city being destroyed to showcase how prepared/numerous/tough the armies of the villain(s) are, to pretty much holding up to whatever gets thrown at them with little effort.

This is a subtrope of Crazy-Prepared. See also The Siege. If the defenses fall, the after effects may include Watching Troy Burn.