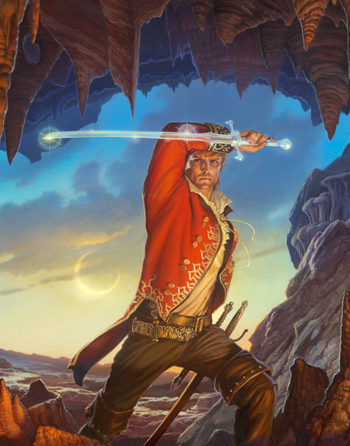 "He uses glass knives. Chips them out of plate glass. It's the sharpest blade in the universe, you know."
— Chuck Wrightson on Raven, Snow Crash
Advertisement:

In fiction, we all know that anything can be a weapon. What's also true is that a weapon can be made of anything, including glass, something known more for its fragility than anything else.

This isn't quite as improbable as it initially seems; before metalworking, glass was one of the most popular materials for making weapons with sharp edges, along with flint and obsidian (volcanic glass). Even today, glass knives are used in incredibly precise operations, since glass edges don't degrade as quickly as metal does, and it can be sharpened so much that it can create real-life examples of Absurdly Sharp Blade.

However, that doesn't get around the unmistakable fact that glass is incredibly brittle. It's one thing to use it as the head of an arrow or spear, but anything like a sword or dagger that's meant to block as well as attack would leave the wielder with a shattered weapon before long.

Not so in fiction, though! In fiction, anything from solid-glass swords to outright hammers made of glass are possible, often with the handwave of magic, which is why it's not uncommon for them to have magical properties themselves. These items still tend to be frailer than the regular versions, but nowhere near as fragile as they would realistically be.

An advantage that is sometimes claimed for glass weapons is that they can be hidden by immersing them in water. This would not work as well in real life, as water and glass have an index of refraction of 1.33 and 1.5 respectively. Corn syrup would be a better refractive match, but also kind of messy.

Grievous Bottley Harm is an improvised version, where a glass bottle is used as a weapon. Contrast Soft Glass, where glass is much less injurious than it should be, and compare Crystal Weapon for another type of brittle material unrealistically used for weaponry. Also (despite being its Trope Namer) not to be confused with Glass Cannon, which is a term for anything with high offensive power but very little defense (although, it is named for what would be an example). Still, compare The Power of Glass.

If the glass weapon is really just a glass shard fashioned into some kind of crude knife or stabbing and slashing weapon, then that's a Sinister Shiv.