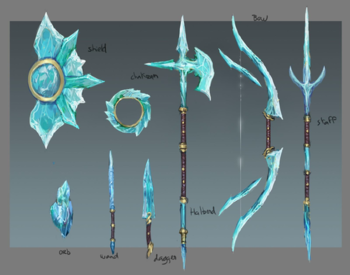 The kind of diamond you should be afraid of being a girl's best friend.
Advertisement:

Whatever the reason, it's common for important or magical items to be made out of crystal, and for these items to be used as normal despite crystals being essentially very pretty giant rocks. (And yes, we know that the scientific definition of crystal is broader than that and that among other things, snowflakes are also technically crystals, but the word colloquially only refers to the varieties of rock and 99% of the time the rocks are what are pictured when something is described as crystal.)

This leads to odd situations like a character swinging around a crystal sword without a care for its logically enormous weight or of the fact that there's a reason that rock weapons are very uncommon: they can be snapped very easily if pressure is put on their sides. Chalk the prevalence of these sorts of weapons made up to Rule of Cool (and don't even get us started on crystal bows...)

Compare Glass Weapon for another type of unrealistic weapon material, and Gemstone Assault for when the crystals aren't shaped into weapons but are still used as them.