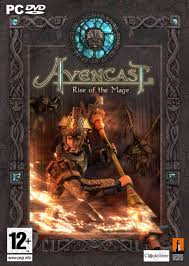 Avencast: Rise of the Mage is a role-playing game by Clockstone Studios. An unassuming apprentice mage, too bored to take part in regular studies, applies for early graduation from the magical Academy of Avencast. Little does he realize that the fate of the entire academy and, indeed, existence itself will shortly be resting on his shoulders.

The 2007 game is the first developed by Clockstone and heavily incorporates elements of fighting and other action games.