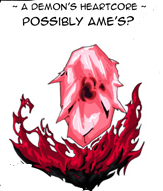 Behold The Heartcore! The mightiest organ of the demons! Tastes like Dragon Fruit!
Advertisement:

There are plenty of reasons to hunt a monster. Maybe you want revenge for the village it burnt down. Maybe you're after the fame and fortune that such a kill can bring.

For those who live in some universes, however, there's another reason: If you cut open its body, you can find a ruby as big as your fist (or even bigger) nestled in among its squishy bits. This is a Gem Heart.

The creature the Gem Heart is in is always large and dangerous; dragons are a common case. Sometimes, the stone comes naturally shiny and faceted, other times it doesn't. Often, this gemstone possesses some special magical ability.

In more fantastical universes, this gem actually takes the place (and function) of a major internal organ; in other cases, it's simply a crystalline growth with little immediately visible effect on its owner's biology. The heart is the most common, hence the name, but finding gems within the brain isn't uncommon either. In works with a higher degree of biological verisimilitude, these stones are often explained away as gizzard stones, used to help the creature break down its food for digestion.

Subtrope of Gem Tissue. See also Power Crystal. Often a form of Body to Jewel. May overlap with Heart Drive or Immortality Inducer.