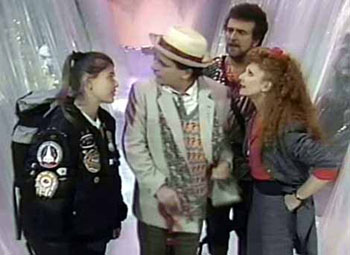 Trading in spoken-for Mel for the streetwise and incredibly badass Ace.
Belasz: What are you doing here?
The Doctor: That’s a very difficult question. Why is everyone around here so preoccupied with metaphysics?
Glitz: I think she’s going to kill us, Doctor!
The Doctor: Ah! An existentialist!
Advertisement:

The one where the Doctor hangs out, a man's face melts, and we meet the companion who would define the trope Moment of Awesome.

Written by Ian Briggs. This three-episode serial first aired from November 23 to December 7, 1987.

The Doctor and Mel visit Iceworld, a waystation for space travellers on the inhospitable ice planet Svartos, where they run into old acquaintance Sabalom Glitz, who has come in search of a dragon that is rumoured to guard a treasure in the tunnels below Iceworld. They are joined on the quest by Ace, a young woman working as a waitress in one of Iceworld's eating establishments after being stranded on Svartos by a Negative Space Wedgie.

Along the way, they cross paths with one of Iceworld's long-term inhabitants, a Humanoid Alien named Kane who must live in sub-zero temperatures to survive, and who is also seeking the dragon's treasure for his own purposes.

The first episode ends with an infamous Literal Cliffhanger, as the Doctor climbs past a safety railing and dangles himself over a precipice for no apparent reason. (The intention was that he'd found his way blocked by a rockfall — which isn't shown in the episode as aired — and was trying to reach a path that crossed the cliff face — which also isn't shown until Glitz helps him down onto it at the beginning of the following episode. Much later on, in "The Name of the Doctor", it was finally explained that it was one of the many attempted interferences of the Great Intelligence, and a Clara had a hand in saving him.)

At the end of the adventure, Mel — in a front-runner for the hotly-contested title of Most Arbitrary Doctor Who Companion Departure Ever — decides to leave the TARDIS and travel with Glitz, and the Doctor offers Ace a lift home (via the "scenic route").