Recap / Doctor Who S24 E3 "Delta and the Bannermen" 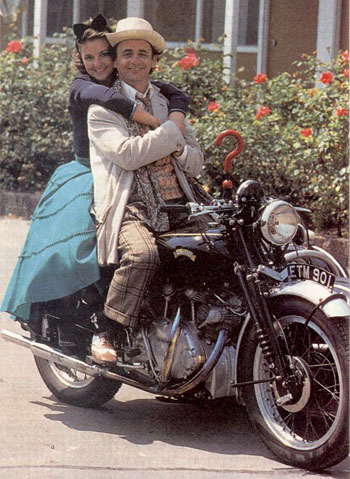 Where were you in '59?
"You are not the Happy Hearts Holiday Club from Bolton, but instead are spacemen in fear of an attack from some other spacemen?"
—Burton
Advertisement:

The one with the green baby. No, not the one from Stone Ocean.

The TARDIS is the ten billionth customer at a hyperspace tollbooth, and the Doctor and Mel win a free vacation through time and space to Disneyland in AD 1959. Mel boards a Time Machine in the form of a bus (no, it's not a TARDIS). The Doctor follows in his Old Semi-Reliable.

In 1959, the US launches a satellite which promptly collides with the bus, which makes an emergency landing just outside a Welsh holiday camp called Shangri-La. One of the other passengers is Delta, Queen of the Chimerons. She and her egg are the last of their kind, as the evil Bannermen have taken over her world.

Meanwhile, two bickering CIA Agents (the Earthbound version) are notified that the satellite was last seen over their area. All these people will get mixed up in the affair when the Bannermen are alerted to Delta's whereabouts.

Advertisement:
This was only the second three-part story in the classic series' 25-minute format,note Season 22's "The Two Doctors" was three 45-minute episodes and the first to be produced that way: 1964's "Planet of Giants" was filmed as a four-parter and reduced to three in the edit. The three-part story would become a staple of the Seventh Doctor's era because of the 14-episode season and reduced budget imposed on the show by BBC executives; each season would have two four-part stories and two three-part stories, with the latter two effectively produced as one six-episode block with the same director and production team, with one being entirely filmed on location and the other being produced entirely in a studio.