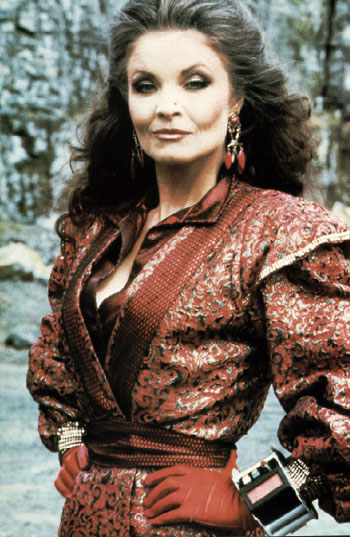 Meet Michael Grade's agent of bridge-dropping against the Sixth Doctor and his heliotrope coat.note Big Finish had the last laugh, though, even if it took them 28 years for it. And okay, we broke our promise regarding the coat jokes from the previous story, but now we're done with them, at least for a good while.
"Ahh! Thank goodness, this regeneration I've regained my impeccable sense of haute couture."
—The Doctor, finally realizing the error of his ways.
Advertisement:

The one where the Sixth Doctor suffers Death by Falling Over, and we are introduced to the Seventh Doctor... first via a wig, since Colin declined to show up for the trade-off, considering he'd been fired.

Without even an opening title sequence to kick things off, this serial features an impressive (for the time) CGI shot of the TARDIS randomly flying around as it gets zapped with lasers. Why it's zapped with lasers, what's going on, who's doing what, that's unimportantnote ...Unimportant to this story, that is. For those who are curious, read the following, but beware spoilers if you haven't bulked up on the Big Finish Doctor Who audio series, "The Sixth Doctor: The Last Adventure". The Sixth Doctor has just piloted his TARDIS to Lakertya after trying to steer away from the planet in response to a warning that there's a radioactive presence nearby, because a subliminal command from his future self has jolted his mind and caused him to forget that. His future self in the same incarnation has enacted a risky gambit that will result in his past self crossing paths with the Rani (neither Doctor realizing she's skulking about the planet and the source of the danger, just that there's something dangerous in its vicinity), whose lasers are comprised of this deadly radiation, which harms Time Lords and excludes humans (all it does to Mel is lull her to sleep). In doing so, his past self will be forced to regenerate and cancel out a timeline where his nemesis, the Valeyard, achieved total victory, winking the Valeyard into oblivion in the Matrix and causing the future Sixth Doctor to be overwritten with the result of his regeneration, which is starting to take place. At the end of it all, the following happens: the TARDIS is being zapped and forced to land on an exotic alien planet as a day-glo lizard guy watches. The Rani steps in and gloats while the unconscious Sixth Doctor (played by Sylvester McCoy with a blond wig) regenerates into the Seventh Doctor (played by Sylvester McCoy without a blond wig).

The title sequence is now finally shown, the first one to ever use CGI in the series, equally as impressive for its time as the opening scene of the teaser. The theme arrangement it's one of the first compositions by newcomer Keff McCullough, who will be providing the soundtracks for the remainder of the classic era, and lathering every story hereafter in poppy late 80's synth.note Synthesizer-driven scores had been the norm since season 18 and had been experimented with numerous times since the Second Doctor's run, but this is where the show's synth-driven scores started sounding less like novelty "Moog music" singles and Vangelis knockoffs of varying quality and more like Vince Clarke or Trevor Horn on methamphetamine.

Once it ends, the Rani then takes the Doctor off to her secret laboratory, where he wakes up and deduces that she's going to do something horrible with a nearby asteroid made up of Strange Matter. Before he can do anything else, one of her bat-like mooks, the Tetraps knocks him out again, and she doses him with amnesia juice, while leaving the companion Mel back in the TARDIS to stumble around the exotic alien landscape with that day-glo lizard we saw earlier. The Doctor awakens to see the Rani disguising herself as Mel in order to trick the Doctor into helping her with her experiments by pretending that they were his experiments.

The Doctor is very miffed to have regenerated, and even more miffed by what he thinks is regular old post-regenerative amnesia. He is reluctant to do any work on "his" machine until his mind starts working again and goes off to the TARDIS pick a new outfit instead, finally freeing himself— and the viewers— from two seasons of dressing up as animated clown vomit in the process. The Rani disguised as Mel has to put up with the Doctor trying on several of his old outfits before settling on his new attire. Eventually, the Doctor is able to figure out what is wrong with the Rani's machine and she leaves for her TARDIS to go get the part it needs.

Mel sneaks into the Rani's evil base of operations (after having been Trapped by Mountain Lions for a couple of hours) and the Doctor, still amnesiac, thinks that she must be the Rani. They quickly sort out the confusion by checking each other's number of pulses, and after a sweet Headbutt of Love, they head off together to stop the Rani's evil plan.

Eventually, the Rani's diabolical scheme is revealed: she's been kidnapping the smartest people throughout space and time in order to create a gigantic artificial brain. By blowing up the Strange Matter asteroid, she will expose the brain to radiation that will cause it to grow bigger and bigger until it engulfs the entire planet, and give it the power to control time anywhere in the universe. Since the Rani really loves dinosaurs, she's going to retroactively replace Earth's population with them. And possibly some other stuff. Evil stuff. However, her plan involves hooking the Doctor up to the giant brain together with the likes of Einstein and Pasteur, who of course all immediately proceed to not listen to the Rani. The Doctor rescues the lizardmen, straps their bombs to the giant brain instead, and taunts the Rani into activating said bombs. He drops the geniuses off back home (promising Einstein he'll show him how the TARDIS works later. He'd later have trouble with this.) and runs off for more adventures with Mel in the TARDIS. As for the Rani, she's left (literally) hanging with the Tetraps, who are a little peeved that she intended to let them get fried by the asteroid explosion, as she vows her revenge.

After the departure of Eric Saward near the end of the previous season, Doctor Who got its final script editor of the classic series, Andrew Cartmel. His first script, however, was inherited from the previous team. This story was originally intended for Colin Baker's Sixth Doctor by Pip and Jane Baker (old hands at writing for him by this point). Although BBC executives had ordered John Nathan-Turner to dismiss Colin Baker from the role, they were amenable to let him appear in this serial in full, with the Doctor regenerating at the end. Baker, worried about the work he might miss out on if he was still considered contracted to Doctor Who even though he wasn't actually filming the show, refused to return for anything less than a full season; the BBC refused, and the story was sent through the re-write cycles. It's notable for the final appearance of the Rani in the series (not counting Doctor Who 30th AS "Dimensions in Time").

There would be a number of attempts over the years to give the Sixth Doctor a "proper" going-away story, including the novel Spiral Scratch, which met with dubious popularity. Years later, Big Finish would write another final chronological Sixth Doctor story, the Big Finish Doctor Who audio "The Last Adventure", which is widely popular and finally gave Colin the chance to hand over the role to Syl with some dignity. If you haven't listened to it prior to watching this, we highly suggest you do, as it fills in a very important space between this television story and the last.