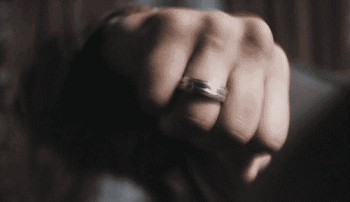 This is a trope where someone attacks the victim through the POV of that victim. It gives the illusion to viewers of what it's like to actually get PUNCHED IN THE FACE! Ouch!

Similar to Camera Abuse, except for the fact that there's not supposed to be any camera - the attack is just viewed through the victim's face. Many cases are represented by a Hit Flash of some sort at the point of impact, but there are a few exceptions, like the use of a Smash to Black in live-action uses of this trope. It may also result in an Impairment Shot if the P.O.V. Cam stays where it is after the hit.

While sometimes this is purely for stylistic reasons, other times it's a form of censorship in action shows directed at younger audiences because you never see the hit. A character punches the screen, cut to another character flying across the room, but you never see the point of contact.

A Super-Trope to Shaky P.O.V. Cam.

See also Sean Connery Is About to Shoot You and The Fourth Wall Will Not Protect You.

Can be a form of Gory Discretion Shot if the attack is particularly violent.