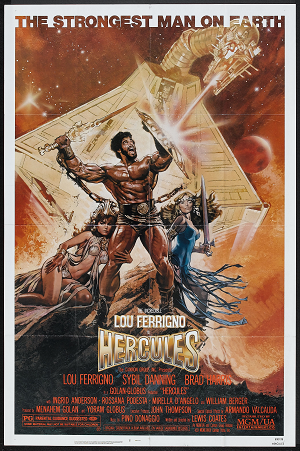 Movies about the strongman of Classical Mythology are legion, and The Cannon Group threw their hat into the ring with this Italian-mounted 1983 production, a starring vehicle for Lou Ferrigno, the bodybuilder who'd come to television fame as The Incredible Hulk a few years earlier. Playing very fast and loose with Greco-Roman myths, it's a perfect reflection of the company's Follow the Leader tendencies — imagine a cross-breed of Superman: The Movie, Clash of the Titans, and Star Wars, and that's a start.

Zeus gifts humanity a being made of light itself and incarnated in the body of a man, a man stronger and more clever than any ever known, to fight for good: Hercules! As infant son of the king of Thebes, he is rescued from usurpers collaborating with King Minos of Atlantis and his equally wicked daughter Adriana, and raised by poor farmers. He grows up mighty, but loses both adoptive parents to the wrath of Zeus's wife/rival Hera and those who serve her. Trying to figure out why he is powerful yet dogged by woe, he seeks his fortune and falls for the beautiful Princess Cassiopeia — but they are quickly separated by the gods; Adriana captures Cassiopeia and she and her father intend to sacrifice her to Hera. Hercules, with the aid of the beautiful sorceress Circe, must now make his way to Atlantis to save his beloved, a journey that literally sends the pair to Hell and back, and even into the stars.

The film did well enough to warrant a 1985 sequel, The Adventures of Hercules II (alternately known as either The Adventures of Hercules or Hercules II). An uprising of gods led by Hera leaves Zeus without his seven mighty thunderbolts, and the universe is falling into chaos. On Earth, Urania and Glaucia are women whose society has become a human-sacrificing cult, and are advised by the Little People they call upon to seek the help of Hercules. The resultant trio must retrieve the thunderbolts from a variety of exotic creatures before the moon crashes into Earth. Hera sends King Minos to fight them by granting him powers comparable to Hercules — not realizing until it's too late that he is now capable of taking her and the other gods down too.

Both films contain examples of:

The Adventures of Hercules II contains examples of: