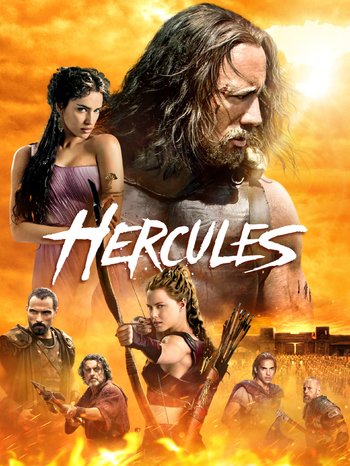 “I Am Hercules!” - Hercules
Advertisement:

Hercules is a Sword and Sandal Epic Action Fantasy film released in July 2014, starring Dwayne Johnson in the titular role and directed by Brett Ratner and written by Ryan Condal and Evan Spiliotopoulos. The cast also includes John Hurt, Rebecca Ferguson, Ian McShane and Joseph Fiennes. It is based on the indie comic miniseries Hercules: The Thracian Wars, written by Steve Moore, illustrated by Admira Wijaya, and published by Radical Comics which is based on the character of Heracles from Ancient Greek Mythology.

The legendary hero Hercules is approached by Ergenia, daughter of King Cotys and summoned to the aid of Thrace, who is beleaguered by the warlord Rhesus and his forces. Together with a select band of followers, he trains the Thracians and leads them in battle — but all is not as it seems...