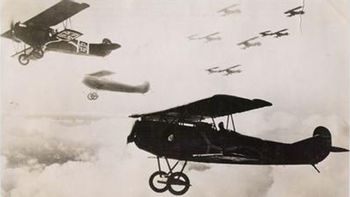 Lyon and Hall play Monte and Roy Rutledge, students at Oxford at the start of World War I. Harlow is Helen, the local society girl that Roy is sweet on—although unfortunately for Roy she is not as sweet on him. Roy is the serious, high-minded one who wants to have a family with Helen, while Monte likes good times and carousing.

Roy signs up with the RFC immediately at the start of the war. Monte is essentially tricked into signing up by a pretty girl at a recruiting station. The brothers are assigned to the same unit and go off to France, where they learn the truth about Helen and about war. They survive an attack on a German zeppelin, but later have to go on a dangerous mission behind enemy lines to bomb an ammunition depot.