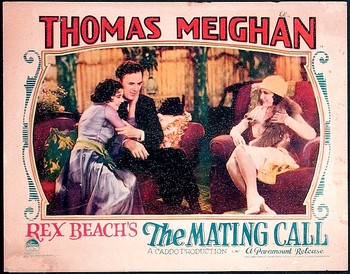 The Mating Call is a 1928 drama directed by James Cruze, starring Thomas Meighan, Renee Adoree, and Evelyn Brent. It was produced by Howard Hughes.

Leslie Hatton is a farmboy somewhere in Flyover Country. While home on leave from World War I, he marries his sweetheart, Rose (Brent). He comes home for good after the war ends only to find out that in his absence, Rose's parents annulled the marriage (apparently she was underage) and she wound up marrying wealthy businessman Lon Harrison. Les is broken-hearted.

Unfortunately for Rose it turns out that Lon is a total creep. He's cheating on her with pretty young blonde Jessie Peebles, the judge's daughter, and if that's not bad enough, he belongs to "the Order", a Fictional Counterpart of the Ku Klux Klan. Rose attempts to seduce her old boyfriend, and nearly succeeds, but Les eventually rejects her, claiming he got married in France. That leaves him needing a wife to back that lie up, so he goes to Ellis Island and finds one Catherine, a war refugee (Adoree), and her parents.